Without active government support, a unique language, connected with the aspirations of the largest forest-dwelling tribal group in India, is unlikely to make much headway in resurrecting itself 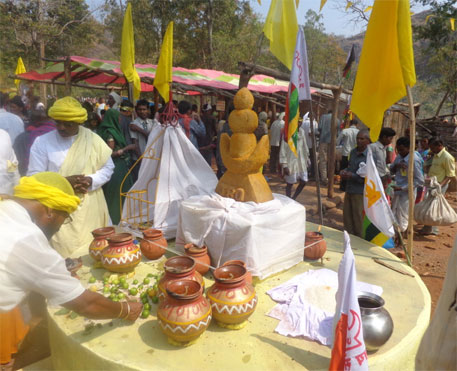 The 2011 census says that the total population of the Gond tribe in the country is 11,344,629.  The total Gondi speaking population, according to it, is 2,713,790. But according to Gond community leaders and observers, the actual numbers could be much higher, given the fact that huge concentrations of Gondi-speaking people are located in the Naxalite-affected areas of Madhya Pradesh, Maharashtra, Chhattisgarh and Andhra Pradesh; in most of these areas, no census is taking place.

Actual number of Gondi speakers, say community members, is many times the number reflected in the census. Gondwana Ganatantra Party (GPP) president, Hira Singh Markam, says that based on surveys carried out by the party, the total number of people with Gondi as their first language is an estimated 20 million. “Since our surveys, too, have their limitations, the actual numbers could be well above this figure.”

Going by sheer numbers – considering the severe limitations faced by census mechanisms – and the vastness of the geographical area over which this language is spoken, social and political groups of the Gond tribal community feel that the language has been unduly ignored by the Indian government, unlike other languages which have undergone a standardisation process and are included in the 8th Schedule of the Constitution. None of these processes have been initiated for the Gondi language.

Gondi has also not been included under the Technology Development for Indian Languages (TDIL) programme of the Department of Electronics and Information Technology, which is developing a unicode – a programme for computers, which allows the user to type in any of the 22 Scheduled Indian languages, they rue.

“Quite a few of the Scheduled languages in India cannot boast of this big a number of speakers,” says Markam. “Yet government has not included this language in the schedule.” Even the official figure of 2.7 million is higher than the number of speakers of languages like Dogri, Bodo and Manipuri, all of which have been included in the Schedule, rues Markam.

According to 2011 Census, Gonds, believed to belong to the Dravidian stock, have been notified as a scheduled tribe in the states of Andhra Pradesh, Bihar, Chhattisgarh, Gujarat, Jharkhand, Karnataka, Madhya Pradesh, Maharashtra, Odisha, Uttar Pradesh, Uttaranchal and West Bengal. The largest numbers are concentrated in the central part of India, known among tribal groups as Gondwana, which includes the Satpuda Plateau, a portion of the Nagpur plain area and the Narmada Valley.

“This vast geographical area should also be a big argument in favour of taking this language seriously,” says Markam. “There are major concentrations of Gondi speakers in four states in the country, and they are spread across no less than 14 states.”

This tribe comprises 13.45 per cent of the total Scheduled Tribes’ population of India, and is the largest tribal group in the country.
Gondi language is spoken, for the most part, by the members of the Gond tribe, but census figures also include languages similar to Gondi, and spoken by tribes who live in the same areas as the Gonds, like Madia, Muria, Dorli and Ganda; these languages are deemed to be part of the Gondi group of languages. Gondi, as spoken today, is heavily influenced by the other local languages spoken in the respective states. For instance, the Gondi spoken in Andhra Pradesh is known colloquially as “Telugu Gondi” and that spoken in Maharashtra is known as “Marathi Gondi” because of the influence of these languages on the particular dialect of Gondi spoken in these areas. In the absence of standardisation, the variations in dialect make it difficult for Gondi speakers from different regions to communicate with one another. 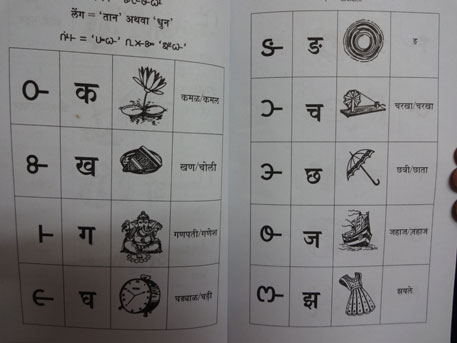 The same is the condition of the Gondi script. This unique script, which is perhaps the only script in the country besides Urdu which is written right to left, also has three or four versions. Another unique quality of the script is that in the northern and central parts of India, it is the only language, barring Gujarati, which has a script of its own. All other north and central Indian languages use the Devnagri script.

However, due to government neglect, this script, too, is falling into disuse. In Karnataka, for instance, says K M Metry, head of the Department of Tribal Studies of Kannada University in Hampi, Karnataka, the Gondi spoken in the Bidar, Dawangere and Bengaluru districts of Karnataka by nomadic Rajgonds have come to be regarded as a dialect of Kannada, because the people have switched to using the Kannada script. “The spoken language is actually very different from Kannada, but because of the script it is mistaken for a Kannada dialect,” says he.

In recent years, efforts have been made to revive the language of the largest tribal group of India. Efforts at popularising the script and the spoken language are being made since a decade or so, leading to some educated Gonds getting sufficient grasp of it to be able to write letters. Books on Gondi alphabet, grammar and usage have appeared, and a few dictionaries have also been compiled. However, none of these is comprehensive, since most efforts are localised and without supported. Recently, CGNet Swara, India’s first community radio on mobile phone, organised a workshop to start the process of standardisation. But all this is just a beginning. Without active government support, a unique language connected with the aspirations of the largest forest-dwelling tribal group in India is unlikely to make much headway in resurrecting itself.