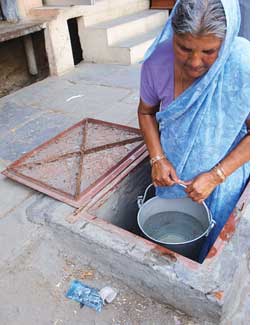 Bhilwara awaits next polls for water

kalavati devi's mind is tuned to a 96-hour cycle. It is within this time frame that her house receives water for an hour, and every housekeeping chore is decided accordingly. A few hundred metres from the house in Bhilwara, her son Jagdish Prasad keeps busy manning a photo copying enterprise, entrusting the 65-year-old with the responsibility to collect and store water.

A decade ago when the water supply fell, Jagdish dug a sump in front of the house to store water. As a ritual the old woman scrubs her feet and gathers her sari between her knees before entering the sump, over a metre deep and wide enough to allow just one person. She first fills two 15-litre buckets, sets them aside and hops out, allowing the pit to fill. But the 100-odd litres she thus collects is not enough for four days. "Hopping in and out is getting harder with age," said Kalavati.Her left ankle is swollen; she twisted it when exiting the pit.

Citizens of Bhilwara, a district headquarter in the Mewar region of Rajasthan, have for long been grappling with water shortage. "There was a time in the 1970s when the city had round-the-clock supply," remembered Kalavati. Now she has to lock the sump when she leaves her home, fearing water theft.

The city with the population of 350,000 needs 35 million litres per day (mld) at a rate of 100 litres per person. But the Public Health and Engineering Department (phed), in charge of water supply in the state, fails to supply more than 16.5 mld. Until December 2007, the supply was once in two days. But according to phed officials, coverage of more localities and poor rainfall--nearly half the district average--have brought it down to once in four days .

Until 1999 Bhilwara was getting water from 61 tubewells in the submergence zone of the Meja dam, 12 km from the city. Once the demand rose phed sunk tubewells in Kankroliya Ghati, 45 km away. The new source is supplying 10 mld to Bhilwara since 2005. "I shudder at the thought of not having discovered the Ghati as source," said R K Bhartiya, executive engineer, phed. "The town would have been abandoned."

To overcome summer stress phed has been transporting water over 100 km via rail from Nasirabad for three months. The 72-bogey train usually makes two round trips each day supplying about 3 mld. Each trip costs Rs 1,80,000.

The groundwater level is declining two metres each year, says the state groundwater department. Long-term solutions have been in the offing for long. In 2005, phed prepared an agenda note highlighting Bisalpur dam, 135 km away, and the Chambal river, 138 km away, as options for improving water supply. The department noted that Bisalpur, being the nearest source and within the district, would be a cost-effective solution.

A gathering of engineers and the political class on June 12, 2009, however, finalized plans to bring the Chambal water. C P Joshi, the Bhilwara MP, had won the recent general elections on this promise, said Devendra Derashri, secretary of Paniwale, an ngo that last year filed a public-interest petition for the Bisalpur water in the Rajasthan High Court. The Chambal project is estimated at Rs 1,200 crore, double the cost of the Bisalpur scheme, he said.

While it is intended to meet Bhilwara's demand until 2041, it will not be until 2013 when Chambal water can reach homes. "It has been proposed in a way to deliver water just before the next general elections," Derashri added.

Paniwale's submission to the court was that 35 per cent of Bisalpur dam's catchment lies in Bhilwara district, implying a right to the source. Asked about the suitability and cost of the two schemes, a senior phed official said, "I can only execute the scheme. The decisions regarding suitability are taken by the political authorities."

Kalavati will have to wait at least four years before she can leave her sump unlocked.