Cosmetics can cause infertility 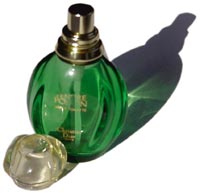 scientists have found high levels of a chemical, blamed for causing infertility, in some of the best-known perfumes and cosmetics. Christian Dior's Poison, Calvin Klein's Eternity and Lancome's Tresor are among the toiletries found to contain phthalates -- a group of synthetic chemicals that are linked to reproductive damage. The chemicals are used as emulsifiers to help prevent loss of fragrance. Scientists say that phthalates could be absorbed into the human bloodstreams through the skin or inhalation. Numerous studies on rats and mice have shown that phthalate exposure causes genital abnormality.

The latest study was carried out by Health Care Without Harm, a Washington dc-based non-governmental organisation. Thirty-four cosmetic products including perfumes, hair gels and hair sprays available in the European markets were tested. The primary criterion for sample selection was market position. Analycen, a Sweden-based laboratory, did the analysis.

The products were separated into two groups: a group lacking or containing only trace levels of phthalates (less than one milligramme per kilogramme (mg/kg)), and a group containing phthalates equal to or greater than one mg/kg. Using this criterion, nearly 80 per cent of the products were found to contain phthalates and more than half of them contained multiple phthalates. Phthalate concentrations were found to be nearly two per cent of the product formulation in most of the items.

Surprisingly, even products of Lever Faberg and L'Oreal were found to contain phthalates. A similar study of cosmetics in the us had earlier revealed no phthalates in the companies' products. This indicates that these companies can formulate products without phthalates.

The European Cosmetic Toiletry and Perfumery Association has termed the study finding as completely inaccurate and misleading.