A big shot at nylon 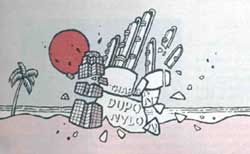 THE agitation against the upcoming Rs 600 crore Thapar DuPont nylon 6,6 plant in Ponda taluk in Goa took an ugly turn on January 23 when protestors blockading the approach to the site were fired upon by the police, killing 1. Following the incident and the intensification of resistence by the villagers of neighbouring Kerim and Savoi-Verem hamlets over the past year, there are reports that the plant may be shifted to a less sensetive location in the state.

The blockade was organised by the Anti-Nylon 6,6 Citizen's Action Committee, led predominantly by coconut and cashew plantations owners. The violence comes after a month of escalating activity by the state's anti-nylon groups. In a significant development, the All Goa Citizen's Committee for Social Justice and Action, which was earlier at the forefront of the demand of the topographical realignment of the Konkan railway, supported the anti-nylon groups with the backing of highly influential church.

Says Subhash Gaitonde, the sarpanch of Kerim village, "Till now, we were ready to talk to the company or the authorities. But now we just want the plant to go away from here. Firing on peaceful protestors demanding the safety of their plantations and fishing territories has sealed the plant's fate."

The police claims that firing was ordered when protestors used shotguns and explosives. Vincent John, a coconut plantation grower from Savoi, however, contends, "We were refusing entry to the DuPont team which arrived with a police escort. Our pleas to arrange a dialogue were turned down."

The industry considers the sudden escalation a major setback because it feels that it could become a deterrent against further investment in the state, with activists and green groups mustering more people's support.

Prakash Surve, member of Green Goa, a NGO, says, "Thapar DuPont is responsible for the mistrust among the residents of the area as they pushed the project with utmost secrecy. Instead of taking people of the area into confidence, the company hired the Delhi-based public relations firm Perfect Relations to boost its image in the state."