A blast off the top

The blowout at its rig in Andhra Pradesh has put the Oil and Natural Gas Commission in a technological fix, apart from raising the question of whether safety measures at the other exploration sites are adequate 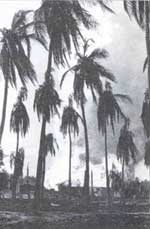 ALL it takes is a blow to settle a dispute: the blowout in the rig at Allawaram village in Pasarlapudi taluka, Andhra Pradesh, did just that. There is little question now that the Oil and Natural Gas Commission (ONGC) passed its brief: to bring the country as close as possible as soon as possible to oil and gas self-sufficiency. Add a rider: as safely as possible -- because other oil companies the world over have bypassed safety before, with serious environmental and economic consequences.

Under scrutiny now -- both by the government and hawkish private parties -- are India's 200 onland oil/gas wells and scores of ongoing drilling operations. It has become clear that oil exploration must be backed up by constant upgradation of the status of research in related aspects like geophysics and metallurgy.

Dusk has not fallen over the Pasarlapudi region since sunset on January 8 when the final phase of drilling at one of ONGC's most ambitious onland gas exploration projects climaxed in a 200-mt column of fire.

The 1,500 residents of 7 adjoining villages were evacuated fast enough to the B S K R College in Amlapuram. A N Bhatt, regional director of Southern Region, ONGC, said that "panicking crowds can hamper firefighting operations". But the trees couldn't be relocated: as temperature around the well shot to 1000 0C, the trees around were burnt to cinders and in a 500 mts radius turned ash brown.

A detailed "blowout control plan" was outlined as panic spilled out. Despite public assurances to the contrary, the ONGC knew very well that something had gone terribly wrong.
Says M V Prahlad, drilling engineer with the ONGC base at Rajahmundry,, "Drilling was almost over. We had drilled upto 2,770 mt by a technique known as 'telescopic drilling."

Pipes jamming in mud is a common phenomenon during drilling. Sometimes, pressure forces the casing for the pipes against a pipe or the drill becomes unstable. Says Bhatt, "There is no oxygen inside the sedimentary layers. But here, when the pipes got stuck and the drill moved out, oxygen entered the canal. The gas reached the top of the well.

Through a rotary drill head, a steel pipe is slowly pushed through the surface of the earth. After drilling the length of the pipe, concrete is poured between the pipe and the tunnel. In the next phase, a pipe with a smaller diameter is pushed in. After lowering, concrete is poured into it.

M V Prahlad, a drilling engineer, says, "The process is repeated over and over till gas or oil is reached. The last pipe is closed at the bottom. A long cable is then lowered with a perforation gun, and a hole is punctured at the side of the casing close to the bottom. Pressure is then gradually reduced. A round steel flange is fixed on top of the well. On top of this flange the well head or the Blow out Preventions equipment is mounted. The valve in the head controls the flow of gas/oil from the well."

Admits Neil Adams of Neil Adams Firefighters Inc, Houston, USA, who was desperately summoned, "The pressure at the well is definitely very high, higher than what was in Kuwait. This is going to make the capping operations a tough task."

In a meeting that ONGC officials had with T K Diwan, the relief commissioner appointed by the state government, the disaster mitigation plan came under fire.

Although the plan contained a detailed course of action in case of a workers' strike or potential sabotage, it did not even mention blowouts.

The ONGC rushed the Crisis Management Group (CMG), a crack team of commandos headed by S D Bhasin, a former general manager and veteran of many blowouts. But Adams, one of the world's foremost firefighters, was called in anyway, explains Rangarajan, "because 2 heads are better than one in such a situation."

It took 4 days for the capping operations to begin. The work on a large water umbrella, thrown over the fire by 4 high-discharge pumps and hoses, was delayed because there were no big high-discharge pumps on site. Admits an ONGC official, "This is a problem with all the onland exploration ventures." Emergency digging for 2 ponds and a canal started 2 days after the disaster.

Says M V Buch, a CMG member, "Once the temperature drops, huge hooks will be connected to the debris. These will be pulled out with the help of earthmovers. Only after that can the state of the well head be assessed."

It had become clear within 2 days of the operations that the well head, the Well Control Equipment, was beyond repair. Both Bhasin and Adams were of the opinion that a new head would have to be mounted before any attempt could be made to stop the flow of gas.

Says Adams, "We will try to extinguish fire first with water. If this fails, then explosives -- usually, dynamite. An explosion at the mouth cuts off the oxygen supply and provides the firefighters enough time to place the flange and the Well Control Equipment. If this doesn't work, another option is to use chemicals like carbon dioxide foam, which cuts off the air to the fire."

The next stage is capping the well. In circumstances where the head equipment is intact, a flange and a blowout preventer can be mounted. Says CMG member K Satyanarayan, "But in cases where the head is destroyed, a slip-on flange is put over the pipe."


Friction arose between Adams and the ONGC when he insisted that a head had to be imported from the US; the ONGC wanted to depend upon the one fabricated by its own experts. Adams had his way and then suggested the creation of a relief well near the burning well to divert the gas and control its flow. But Anand sounds a note of caution: "The cause of the blowout is yet not known. Digging another well would amount to creating circumstances for another blowout."

Adams and the ONGC experts again developed differences over the fate of the well. While Adams suggested "dynamic killing" of the well as future use could lead to leakage of gas in the nearby areas and cause a catastrophe, the ONGC, envisioning little but the money it would lose an effort to salvage some dirtied reputation, insisted on keeping its options open. Says a senior ONGC engineer, "The Pasarlapudi rig cost us Rs 9.2 crore. The Commission also has to keep in mind that very few of dug-up wells prove to be productive."

The episode has established one fact: that oil exploration needs more than a hand from general development in almost all fields. Says Rangarajan, "The oil exploration industry cannot move on its own. A high degree of indigenisation is required. We are importing virtually every important equipment from abroad. The B-14 steel pipes come from Germany as the Indian steel pipes do not fit the requirements. The well heads, drill heads and the perforation guns come from US companies."

Defending the ONGC, Bhatt categorically says that its objective is to produce oil and gas and not manufacture equipment: "The cost of technology upgradation is much higher than the cost of the equipment. And the technology changes very fast."

Also, the 10 institutes run by the ONGC have failed to achieve any technological breakthrough. Most of the modern techniques for drilling, capping and exploration have been imported from the developed world. Bhatt explains, "Most of the institutions are getting into applied research. ONGC's outfits do a lot of research as far as seismic data and others are concerned but the West has a distinct edge."

It's an edge that runs deeper than the ONGC's present bite.