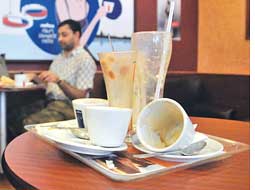 The coffee plant might soon take over the Western Ghats

cultivated crops are usually not invasive, but coffee--a native of the Ethiopian highlands--may have the potential to invade the tropical rainforests in the Western Ghats. According to the International Union for Conservation of Nature, an invasive is an exotic plant which establishes itself in natural or semi-natural habitats, is an agent of change and threatens native biological diversity. Of the two coffee varieties (robusta and a rabica) cultivated in Southern India, robusta shows all the symptoms of turning into one.

The Nature Conservation Foundation, Mysore, studied four patches of forests adjoining coffee plantations and varying in disturbance levels from relatively undisturbed to highly disturbed. Disturbance was measured in terms of human activities such as felling and grazing that damage the forest's ecology.Greater the number of activities, higher is the disturbance level. The arabica sp was seen more in patches that had been highly disturbed by human activities. But the robusta species was found to infiltrate any forest patch, irrespective of the disturbance. Moreover, since arabica plantations were hit by the pest white borer repeatedly in the past decade, planters switched to robusta which made it a bigger threat.

The researchers also found a distinct pattern: there were more coffee plants at the forests'edge. The edge receives more sunlight than the interior. Although coffee grows under shade, robusta is capable of growing in light too.

The coffee plant also produces a large number of seeds so more plants can grow. This increases the likelihood of the potential invasive to turn into one and take over completely.

"Any plant that has a symbiotic relationship with a local animal can be invasive too. Coffee berries are relished by civets and they are the biggest dispersers of its seeds. It has already invaded Nandi Hills, near Bangalore," said Ranjit Daniels heading the ecological research organisation, Care Earth, in Chennai.

In terms of rival invasives, the coffee plants had none. Lantana is a well known invasive but very little of it was found growing at the forest edge. "Had it been there in larger numbers, it would have taken over," said Atul Joshi, one of the authors of the study that will appear in an upcoming issue of Biological Invasions.