A case of tolerance 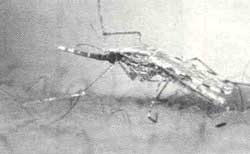 A SMALL group of proteins, collectively known as heat shock proteins (HSP), have been the cause for considerable excitement lately. These proteins had initially attracted attention because they seemed to be generated in an extraordinarily large variety of organisms - ranging from bacteria to humans -in response to an increase in environmental temperature above their normal levels.

Heat shock causes a significant rise in the HSP level and a simultaneous decrease in the level of most other proteins that are otherwise created in substantial amounts. The genes that encode HSPS can respond to temperature, but they are not thermometers: if you put a fly HSP gene in a mammalian cell, it creates fly HSP when the temperature is raised, but does so only at the temperature characteristic for the mammal.

Subsequent work has shown that HSPS are part of a non -specific defensive response of the system -not just to heat shock, but to a large number of stressful situations including starvation or poisoning. D N Deobagkar and colleagues at the department of zoology, University of Pune, Maharashtra, have reached an interesting conclusion with regard to HSP synthesis in mosquitoes. The observations could have disturbing implications for pest control. The report highlighting the results of their research is due to appear soon in the British Journal of Medical and Veterinary Entomology.

These scientists studied two mosquito species, the Anopheles stephensi and the Aedes aegypty. Larvae of both species die within about two hours if they are exposed to a temperature of 43c -well above that of the 25c in which they are reared. However, if the larvae are pre-adapted to high temperatures by initially exposing them to 37c or 39c for one to two hours ( this has had no visible effects), brought back to 25c for half-an-hour and then shifted to 43c, the higher temperature no longer remains lethal -at least not always.

For example, where there was 100 per cent mortality after a two-hour exposure to 43c, a pre-exposure to 39c for one hour reduced the mortality to less than 20 per cent. This phenomenon, known as thermotolerance, is well- known and reasonably well understood.

The researchers also carried out an experiment in which the larvae were exposed to a carbonate pesticide, propoxur. Exposure to propoxur at concentrations between 0.6 and 1.25 milligrams per litre led to rapid deaths, about 50 per cent of the larvae dying in 24 hours. Pre-exposure to propoxur at a sub-lethal concentration led to the appearance of tolerance. Interestingly, pre-exposure to a sub-lethal insecticide concentration led to the larvae developing thermotolerance too as a side effect: they developed resistance to a shock of 43c.

The experiment demonstrated that mosquitoes exhibited a cross-tolerance for one form of stress - high temperature -if they had been previously subjected to another stress -an insecticide. But does this also work the other way round? The answer turned out to be positive: pre-exposure to 39c made the larvae tolerate propoxur.

Adaptive cross-tolerance to different forms of stress, presumably mediated via the ubiquitous HSPS, could have important practical consequences. For example, a pathogenic virus, whose intermediate host is an insect, is a form of stress for that insect. If the insect is able to cope well with a high load of the virus, it means that it will be an efficient vector for the transmission of that virus.

On the other hand, the less tolerant the insect, the less likely it is to live long aIid spread the infection. Studies have shown that mosquitoes reared in warmer insectories both tolerate a higher virus load and are more competent in virus transmission than those raised in cooler insectories. If the cross-tolerance between temperature and insecticides, or temperature and viral load, extends to a cross-tolerance between insecticide and viral load, the consequences could be serious. Indeed, the outcome could be comparable to the risk posed by the evolution of insecticide resistance, except that it would be much worse.

Resistance usually involves a genetic change -a mutation which is inherently something that happens with a very low probability. On the other hand, tolerance to an insecticide is a physiological deputation and can occur in an entire population simultaneously. As the authors of the report point out, we may need to face up to the prospect that insecticide use could enhance the transmission of malaria, dengue or other vector-borne diseases.