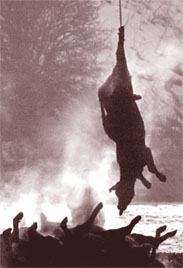 an outbreak of the foot-and-mouth disease in the uk has sparked off a scare across the world, prompting several governments to impose bans on British livestock and animal products in an effort to contain its spread.

The first 27 cases were reported on February 19, 2001, at the Cheale Meats, an abattoir in Essex and soon spread to 37 farms across the country. "The virus is spreading to five to six farms every day," said Jim Scudamore, Britain's chief veterinary officer.

The latest crisis has come as a severe blow to the country's farming community, which is yet to recover from the effects of the mad cow disease. At present, a self-imposed ban on exports is costing the British meat industry us $12 million each week in addition to the loss of hundreds of cattle heads, which are being slaughtered to contain the spread of the disease. "We have confirmed at least 74 cases and around 67,000 animals have been slaughtered and exhumed till now," said Nick Brown, the country's agriculture minister.

Veterinarians have little clue as to what caused the outbreak. They suspect the virus may have come from imported cattle. "Our ports and airports are woefully defenceless against illegal food imports. We even import from countries where foot-and-mouth is endemic," says Brown. However, some officials feel that modern farming methods are responsible for the disease. "Pigs are fed swill that no vet would approve," commented Mike Robertson, the editor of the London-based Sunday Times .

The disease infects hoofed animals like sheep, cows and pigs. Symptoms include blisters on the feet and mouth of the infected animals. Experts believe that vaccination is the only solution. They say it is a disease that knows no boundaries as it can spread through air or transmitted through urine, milk, semen and saliva. The virus can also be carried through the wind, on the soles of tourists' shoes or the wheels of cars.

Already, the spread has been quick and devastating. In Pakistan, veterinarians and livestock traders said that thousands of imported animals have shown symptoms of a disease similar to the foot-and-mouth. Three pigs found in Taiwan with signs of the disease have been killed. In Iran, where the virus is endemic, the disease was diagnosed in sheep in at least three centres near Tehran.

However, livestock tested in France, Denmark and Belgium has proved negative. German health officials are optimistic about the disease not affecting the country, but the 'all clear signal' will not come till the end of March 2001. European countries have started slaughtering animals that have been imported from Britain.

In India, the direct losses suffered due to the disease are estimated to be more than Rs 1,500-2,000 crore per year, according to a research paper by Lal Krishna, assistant director general of the animal sciences division of the New Delhi-based Indian Council of Agricultural Research. "Four strains are endemic to India and we are vaccinating against these regularly. However, we do not have good quarantine facilities and law, and movement of animals is not restricted. We are not concerned about the uk outbreak, but the one reported in Karachi can affect us as we do not have much restrictions on the movement of animals in Rajasthan and Gujarat borders," said P N Bhatt, chairperson of the working group on animal husbandry and dairy for the 10th Five Year Plan.

Indian officials, however, are painting a rosy picture and say that the disease will not affect the country. "The foot-and-mouth disease is not a problem for India as local cattle is resistant to the disease. Moreover, before undertaking any crossbreeding, we vaccinate the animals," said S K Prasad, director of the National Bureau of Animal Genetic Resources, Karnal, Haryana. "A ban on import of animals from several countries is already in force, therefore, there are no reasons to worry," said Krishna. "Our regional research centres are well equipped to diagnose the disease and vaccinate animals," he added.

However, a scheme to vaccinate cattle in 1943 by the Indian Veterinary Research Institute, Mukteshwar, Uttaranchal, has been able to cover less than two per cent of susceptible livestock population. Krishna admits that India does not have the capacity to vaccinate the entire cattle population due to the resource crunch. "Since the strains of the foot-and-mouth disease prevailing in the uk are said to be of Asian origin, we have asked them to furnish us with more details," Krishna added.