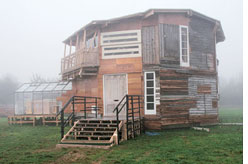 In an era when "recycle" is the buzzword, artistes the world over are making innovative efforts to revolutionize the way people look at waste. First it was Santiago Sierra, the Spanish artist's recycled human waste, that was put on display at Lisson Gallery, London (see 'Artistic solution' Down to Earth, January 15, 2008). Exhibits of rectangular solid blocks, recycled and sanitized, they were meant to give an insight into the lives of toilet cleaners. Recently Boston-based Rob Pettit created sculptures; each meticulously arranged with thousands of discarded cell phones, which otherwise head for landfills everyday (see 'Viewfinder', Down to Earth, September 15, 2008). With his art, Pettit highlighted the amount of waste involved in 21 st century living.

Taking it a step further, while two German artists have created a gallery from garbage, Paris artist Susan Norman has seen beauty in the dumps of Managua, Nicaragua. Designers Folke Koebberling and Martin Kaltwasser created a 'rubbish' art gallery using waste wood. Named Amphis, the octagonal structure was built using locally donated furniture. The multimedia creations of Susan Norman have been inspired by photographs of slum children, living amidst vast piles of refuse, rot and decomposing plastic. It is currently on exhibition, as part of Environmental Texture at Glenhyrst Art Gallery of Brant, Canada, highlighting the toxic lifestyle of these people. One striking creation in the Nicaraguan dump series is Recycled Lives. A young girl, clad in red, indicating the potential fate of a prostitute, stands holding her toddler sister in a clearing while two garbage trucks in the distance push refuse towards them.