A drop of wood alcohal helps to perk up plants

Plants grow taller and faster if sprayed with a solution of methanol, claims an American farmer 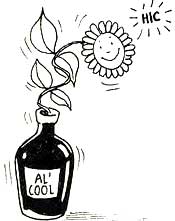 ARTHUR Nonomura, an American scientist-turned-farmer, may usher in another green revolution with his discovery that methanol (or methyl alcohol), traditionally thought to be toxic to plants, can stimulate crop growth in hot and dry regions.

"I think it's going to save the world," says Andrew Benson of Scripps Institution of Oceanography, a leading plant growth expert who is collaborating with Nonomura for the project.

Nonomura found methanol, also called wood alcohol, favours crops classified as C3 plants -- cotton, wheat, roses and melons -- which originated about 300 million years ago. But methanol did not work on C4 plants such as corn and sorghum, which evolved more recently -- about 40 million to 50 million years ago.

C3 plants, which evolved when the earth's atmosphere contained greater amounts of carbon dioxide than it does today, are less efficient at producing food through the process of photosynthesis than C4 plants.

Nonomura wanted to know why some plants belonging to the C3 group wilted in extreme heat. He wondered if the wilting, which occurred at the time of day when photosynthesis is greatest, represented lack of carbon in the air, which plants absorb as carbon dioxide and convert through photosynthesis to starch.

So he sprayed his cabbages with a solution of methanol, hoping it would furnish the much-needed carbon. To his surprise, he saw his cabbages grow into the biggest he had ever harvested. Further, methanol did not have a toxic effect until its percentage in the solution exceeded 30 per cent.

Though more research is required to check for side-effects, the US Environmental Protection Agency has approved spraying of methanol as a fertiliser.

Nonomura's experiment also had unexpected but valuable spin-offs. Because the sprayed plants were more efficient in their use of sunlight, they grew twice as quickly as untreated plants. Thus, they could be harvested earlier, which saved on water. In some cases, even pesticide use was reduced because the faster growing crops escaped some annual pest infestations.