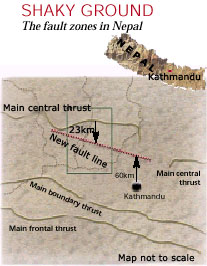 geologists have discovered an active tectonic fault about 60 kilometres (km) north of Kathmandu in Nepal. The new fault runs 23 km south of the Main Central Thrust (mct), which demarcates the Greater Himalayan ranges in the north from the Lesser Himalayan mountains in the south.

Nepal is sandwiched between the Eurasian and the Indian tectonic plates and the central Nepalese Himalaya is gaining at least one centimetre annually due to these plates pushing against each other. The underthrusting of the Indian tectonic plate has been concentrated along several fault zones within a belt about 100 km wide in the Himalayan kingdom. The northernmost of these fault zones is mct .

The findings by Cameron Wobus, a doctoral student at the us -based Massachusetts Institute of Technology, his guide, Arjun Heimsath at Dartmouth College, and others appeared in the April 21 issue of Nature (Vol 434, No 7036).

What intrigued the scientists is an unusual increase in erosion rates in a small stretch along the new fault. An analysis of certain chemicals found in the sediments revealed the erosion rate was 0.8 millimetre per year -- four times that along the rest of the fault. But this is not related to lithology as rocks found on either side of the fault are similar, the scientists said.

They speculate the existence of a feedback mechanism between the high erosion rate and tectonic movement, which might help reduce the stress accumulated in the region by the uplift of the Himalaya and the formation of the Tibetan plateau."The incredible mass of this plateau is struggling for some place to go, and it's possible that focused erosion processes, which remove material at a high rate along the base of the Himalaya, are enabling a reduction in this accumulated potential energy (stress)," says Heimsath.

The new fault lies in the path of the monsoons, which also add to the erosion. The scientists are now trying to determine whether climate is causing the erosion, which may in turn impact tectonics, or is it the other way round. "It's sometimes called the classic chicken-or-egg problem in geomorphology," says Heimsath.

It would be interesting to know if the release of this potential pent-up energy would delay or reduce the impact of an impending great earthquake in the region, which experts predict may occur anytime between now and the next 50 years.