A fight to finish 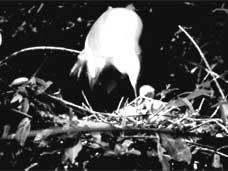 what may initially appear as the ultimate portrayal of new life -- three downy white chicks aflutter in their nest -- later wears the look of a bloody battlefield. The reason for this dramatic end is sibling rivalry. Researchers have found that the eldest chicks in an egret's nest often attack and kill their youngest sibling.

Researchers have been noting the increasing incidence of the killing of the sibling or siblicide -- in an increasing number of species -- while the parents do not lift as much as a feather or a paw to intervene. Ornithologists studying egrets (long-legged birds seen wading in ponds and marshes, which have carried sibling rivalry to the extreme) say that they have begun finding some answers to this practice.

When Douglas W Mock, a behavioural ecologist at the University of Oklahoma in Norman, us , and his colleagues -- who studied both cattle and great egrets -- brought egret eggs into the laboratory to hatch, they were dismayed to find their charges engage in battles. Mock presumed that the same could have been avoided if the parents were around. But the team later observed the chicks displaying similar behaviour in the wild too, and in the presence of their parents. After 15 years of research, Mock and his team have probably hit upon the most convincing piece of evidence to suggest that the parents do not intervene because they are unwitting conspirators in an evolutionary scheme that enables them to perpetuate and better their own kind. Their theory proves that the parents do indeed play favourite.

Egrets can garner just enough food to sustain two of the three hungry chicks. So the parents favour the two chicks born first and provide advantages to ensure that the two will be able to fight successfully for food dominance and safety in the nest, even if it is at the expense of the third one's life.

In a recent Animal Behaviour Society meeting in Flagstaff, Arizona, us , Mock and his colleagues said that the first two chicks are bestowed with a whopping dose of testosterone and other androgens in the egg yolk, nearly twice the amount found in the third chick's egg. "We have every reason to believe that the parents are collaborators in siblicide. Parents are now skewing these androgens in ways consistent with their collaboration with the older siblings," says Mock. He further observed that the behaviour of these birds was based on instinct rather than on any conscious strategy. "The yolk is like a bag of lunch that the kid takes to school. You either give the kid lunch packed with steroids so he will be a brute by recess, or you can give him peanut butter," he argues.

Previous research on domesticated canaries had also revealed differences in the levels of testosterone found in their eggs. However, among canaries, parents provide the youngest with the maximum testosterone.

Evolution seems to have honed a strategy in which parents appear to be maximising the number of healthy chicks they produce by investing most of their resources in the first two. According to Mock, "The parents were probably sincerely interested in raising only two chicks, given the amount of food they are able to bring home. But since eggs are metabolically cheap to produce, they lay one more egg, a strategy called parental optimism." "The third chick acts as an insurance policy should the other two be involved in accidents. If it turns out to be a banner food year, the parents try and raise the third without much extra effort," he adds.

Sarah Blaffer Hrdy, an anthropologist at the University of California, Davis, us , who had earlier proved with her work on langur monkeys that infanticide could be a natural and adaptive phenomena, compliments Mock's research by calling it "an extraordinary and illuminating piece of work".