A fillip to reconstruction 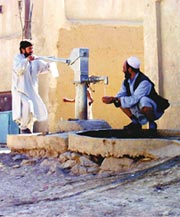 On December 23, 2003 the World Bank approved us $166 million for three projects in Afghanistan to rebuild rural areas, improve farmers' water supply and beef up the customs system. A major chunk of this money (us $95 million) will be for rural reconstruction, for projects communities themselves are to decide. "Critical to the project," a World Bank statement says, "is the process of decision-making around the use of the grants."

The World Bank has also approved us $40 million interest-free credit for the government to rehabilitate the national irrigation system in five river basins. The Bank said the biggest issue affecting Afghans is how to modernise the subsistence agriculture economy to improve food security and expand livelihoods.

The go-ahead comes even as a report of the International Monetary Fund -- released on the same day -- says that massive opium production and widespread lawlessness seriously threaten the Afghan economy. In its first review of the country in 12 years, the imf says opium may now account for half of Afghanistan's gross domestic product.