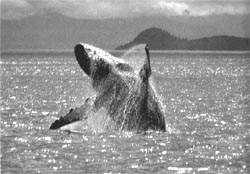 japan's whaling fleets recently set out for the Pacific Ocean on its second hunt of this year. Their targets are bryde, sperm and minke whales. Japan has undertaken the hunting programme despite widespread international criticism. Similar hunts last year had angered the us government, which had threatened the Japanese government with economic sanctions (see Down To Earth , Vol 9, No 10, October 15, p6).

Japan says that its whaling programme is legal as per the rules of the International Whaling Commission ( iwc ). The officials claim that whales are being hunted for research purposes. "We need to find out how many whales consume important stocks of fish," explained officials of the Japanese fisheries agency. Environmentalists, however, allege that much of the whale meat is sold commercially. The Japanese Whaling Association, a non-governmental organisation, has reported that 2,500 tonnes of whale meat was consumed in the country from December 1999 to November 2000.