A flip and a flop 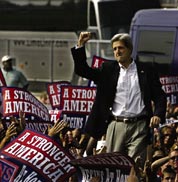 As the November 2, 2004 deadline for presidential elections in the us draws near, the campaign has turned dirty, especially over environmental issues, says online magazine Grist. George Bush's team has fired off more than a dozen press releases about John Kerry's policies on energy, nuclear-waste storage, forest and water protection, which Grist says is "a hodgepodge of smears and obfuscations intended to besmirch Kerry's pro-environment reputation". This, says Sierra Club executive director Carl Pope, is because polls have indicated that voters are taking the environment seriously in key battleground states. "The polling in Nevada is showing that people are voting on the Yucca Mountain issue," he said. "The polling out of Arizona says voters are very concerned about forests and water; Wisconsin polls have shown that the mercury issue could hurt."

Since it is difficult to convince prospective voters that Bush's environmental record is a good one, the idea is to confuse them, and so neutralise the environment as an election issue.

Meanwhile, in Australia, a leading pollster in the country has said that one of the major parties will have to come up with a significantly different package if the environment is to become an important election issue. Managing director of Newspoll, Sol Lebovic, says voters are ranking the environment behind the economy, health and national security.