A fruit for all seasons

Wild mango is not just part of the daily diet of tribal people in Odisha, it also helps them survive the lean season

By Bichitra Biswal, B Salome Yesudas 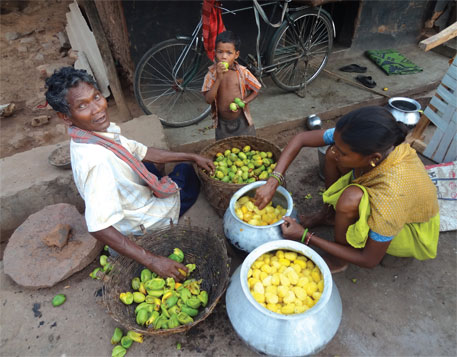 When one thinks of fruit, the first image which crops up in the mind is of neatly decorated fruit carts in urban markets. But fruits are central to tribal diets too. For the tribal population living in the densely forested district of Rayagada inOdisha, fruits, particularly the wild mango, are part of their everyday diet and economy.

It would not be an exaggeration to say that summer time is mango time for the tribal people in the district. Men, women and children brave the heat to collect fallen ripe mangoes in forests for hours every day during the month of May. Every family collects 300-350 kg of mangoes in a season. Raw mangoes are part of several dishes, and fully ripe mangoes are stored and eaten round the year in the form of dried cake called ambosoda.

For preparing ambosoda, mangoes are peeled and squeezed, and the juice is stirred vigorously to make it into a uniform, thick liquid. The liquid is then spread on large winnowing fans made especially for this purpose and left to dry till it takes the shape of a cake. Spreading the juice on winnowing fans is a highly skilled job done by women. If the layer of the liquid is too thin the cake will break while being peeled off the fan, and if it is too thick it will not dry properly.

Preparing ambosoda is a festive affair. Everyone in the village takes part in the process and tries to make and store as much of the delicacy as possible. Since the quantity prepared is very large, platforms to dry the liquid are erected near every house. It is not unusual to find entire villages literally covered with winnowing fans having ambosoda in an array of hues—bright yellow, ochre, red and shiny brown—each shade characterising a different stage of drying. In the words of Lakshmi Pidikaka, a resident of village Hikiriguda, “This is ambosoda time. Our village has turned red. If we take care of the ambosoda in summer, the ambosoda will take care of us in the rainy season.”

After the ambosoda is properly dried, which is indicated by a rich brown colour, it can be stored for the rest of the year. People in the region say that a perfectly dried ambosoda can be stored for even two years. It is valued as an ingredient which peps up their daily diet. 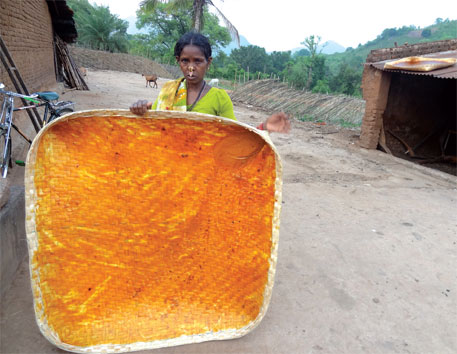 While ambosoda is eaten throughout the year, it is the rainy season when the consumption goes really up. Ambosoda is added to curries for the tangy sweet-sour flavour it imparts and if you add jaggery, oil and spices to it, ambosoda can be eaten as a pickle. TambaTuika of village Patharagadh says, “Ambosoda is our friend in times of scarcity. It adds taste to food, and that too without spending money.”

In keeping with the tribal culture of frugality, no part of the mango is wasted. After the juice is extracted, mango peels are dried and used as fodder for cattle. The seeds too are dried and stored to be eaten as a survival food.

As far as nutrition is concerned, the wild mango is a rich source of calcium, phosphorous, beta carotene, vitamin C, magnesium and potassium, says Nutritive Value of Indian Foods, a book published by the National Institute of Nutrition, Hyderabad, in 2007.

However, there are no studies on how much of the nutrition is retained in ambosoda. Studies on ambosoda’s nutritional value would not just help tribal people market their produce, but could also play a role in the conservation of wild mango trees whose numbers are dwindling due to ecological pressures (see ‘Disappearing wild mango’).

Ambosoda is also a good source of income for the tribal population. Middlemen come to the villages every year and buy it for around Rs 50 a kg. Most families make around 70-80 kg of ambosodaevery season and can spare around 50 kg for sale. There is a good demand for ambosoda prepared by tribals because unlike the commercial mango cake available in the market, ambosoda is made without sugar or preservatives. It is tastier and healthier.

Salome Yesudas and BichitraBiswal work among tribal communities in Odisha’sRayagada district with the non-profit Living Farms. Their work includes documentation of food culture of tribals