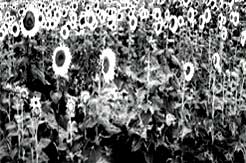 farmers in the districts of Bulandshahar, Meerut, Aligarh, Agra and Badaun in Uttar Pradesh ( up ) are liter-ally sporting sunny smiles after switching over from the cultivation of vege-table pea to sunflower. With the assistance of scientists from the Indian Agricultural Research Institute, New Delhi, they are now using a short-term, high-yielding variety of sunflower named ' arun ' as an irrigated crop ( Farmer & Parliament , Vol 31, No 4).

Traditionally, the farmers used to cultivate potato and vegetable pea from September to November followed by maize in the winter months. Pea cultivation incurs an expenditure of about Rs 5,000 per ha for seeds alone. Moreover, pea occupies the field for a better part of three months and during harvesting farmers have to carry out heavy weeding as weed growth is very frequent in between pea crops.

Scientists closely monitored these problems and after years of research, they succeeded in developing a transgenic sunflower seed which minimises all these problems. Sunflower as a crop has a number of advantages. The expenditure for sunflower seeds, for example, can be as low as Rs 3,000 per ha and the high-yield variety matures in only about 75 days, leaving the fields free for cultivation of maize in the winter months. A little time gap in between harvesting of the sunflower crop and the sowing of seeds for the winter crops also adds to the natural regeneration time of the soil to regain its fertility.

The problem of weeding too, is less severe in sunflower cultivation. The specially designed sunflower seeds give rise to plants with big, broad leaves whose shade hinders the growth of weeds to a great extent. The only problem farmers face is that of widespread damage caused by birds to sunflower heads during harvest time.

The cost of setting up scare-crow devices comes to about Rs 160 per ha. But since overhead costs in sunflower cultivation are much less as compared to growing potato or pea, the farmers can well afford this expenditure to keep the birds away.

It is a seller's market now for sunflower producers, as the low-fat sunflower oil is gaining popularity with dieticians. Besides, the areas producing sunflower are close to Delhi's industrial belt with its booming population, making market access easier.

The National Seeds Corporation ( nsc ), New Delhi, also gives incentives to farmers who have switched over to the high-yield variety of sunflower by incorporating several schemes through the up State Seeds Certification Agency. The unsold product is bought by the nsc directly from the farmers and a profitable price, calculated on the basis of the quality of the produce, is meted out to them.

Farmers in places like Aligarh and Agra where the cultivation of maize had been severely hit by several fungal and viral diseases in the recent past, are also planning to switch over to sunflower as a winter crop. The genetically manipulated sunflower seed is highly resistant to many such diseases. Given these advantages and profits, it is no wonder that farmers are increasingly opting for sunflower cultivation.