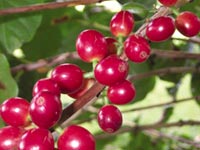 There's good news for coffee-lovers. A naturally decaffeinated coffee plant has been discovered. Researchers in Brazil studied 3,000 coffee plants from Ethiopia and found three with almost no caffeine. The plants apparently lack the enzyme needed to make caffeine. Paulo Mazzafera, who led the team of researchers, revealed: "This is the first report of a decaffeinated variety of Coffea arabica." According to him, this is is the most cultivated species in the world, responsible for more than 75 per cent of traded coffee.

Till now caffeine-free natural coffees have been Madagascan species, which are outside the mainstream and not easy to breed from. Mazzafera believes that this will provide a way for developing countries to compete with big companies producing industrially decaffeinated coffee.

Coffee has been linked to risk factors for heart disease, stillbirths, rheumatoid arthritis and sleeplessness. At the same time, researchers have claimed that drinking coffee could lower the risk of Parkinson's disease and act as a shield against bladder cancer. Maybe, the new breed will provide consumers the best of both worlds.