A hole in the pocket 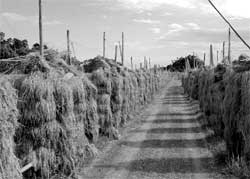 the damage to agricultural crops caused by ozone -- a compound commonly found in smog -- amounts to an estimated us $165 million every or about year in the Kanto region alone, research conducted at the Japanese Shizuoka University shows.

The study, conducted by Toshimasa Ohara, professor of atmospheric environment engineering, and Kensaku Takagi, graduate student at the University, was released at an academic conference on atmospheric studies in Kitakyushu, Japan.

Ozone, a blue-coloured gaseous oxygen-based compound, most often created when automobile exhaust is exposed to sunlight, has been blamed for the destruction of forests in areas with high concentrations of the gas.

Ohara and Takagi studied the impact of ozone on rice, spinach and six other agricultural crops in the Tokyo metropolitan area and six administrative regions of Kanto by studying crop yields and ozone density and comparing them with those grown experimentally and exposed to ozone in greenhouse settings. They then computed the degree of damage on the basis of the unit price for those crops in each prefecture (The Japan Times , October 7).

The most extensive damage was found in Ibaraki Prefecture, which lost an estimated us $57.87 million, followed by Chiba at us $38.86 million. In Gunma, damage to crops totaled an estimated us $28.93 million, while it came to us $28.11 million in Tochigi and us $23.15 million in Saitama.

The report says even though the yield of crops in Gunma was less than in Saitama, the greater concentration of ozone resulted in greater damage to Gunma's crops. In terms of crops, rice suffered the heaviest damage -- an estimated us $93.41 million -- across the entire region, followed by lettuces at us $ 35.55 million.