A Keck for the specks

The faintest and the most distant objects in the heavens no longer remain invincible with the introduction of the powerful Keck Telescope, the biggest optical instrument of its kind in the world, into the arsenal of astronomers. An improved version, the Keck 2, commissioned recently, gives star-gazers much to watch out for 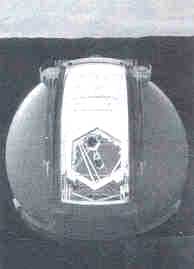 'THE pie in the sky' is no longer miles too high. The keck Telescope, the world's biggest optical telescope, is helping astronomers achieve what they had always dreamt of doing - probing the spectra of extremely distant, and hence faint, objects in space.

The main telescope is operated by a 'computer-controlled piston, which can manoeuvre the instru~ent within the precision 0( a few nan6- metres (one nanometre is one hundred- millionth of a centimetre); this is essential to the same field of view in space, notwithstanding the rotation of the earth, for a desired period of time. "It took us a better part of five years to build it, and we never stopped being finicky," says S J Djorgovsky, professor of astronomy at the California Institute of Technology.

Various institutions - the Institute of Astronomy at Hon~lulu, the Center for Astronomy at the University of California in San Diego and the Palomar Obser- vatory at the California Institute of Technology - are exchanging collabora- tors and ideas to analyse the data thatth~ telescope has been churning out since its official inception in 1993. The us Planetary Science " Cotnmissioh, a subdivision of the National Aeronautics and Space Administration (NASA), uses the Telescope to search for earth-Iike planetary sytems.

The main objective of Keck is to probe far beyond the realms of the solar constitutes one of the ~ost important lines of researches inobserJ. vational astrophysics. Researchers al:e obser~ing the deuterium (heavy hydrogen) spectra from the younger objects in the cosmic family. The abun- dance of deuterium depends on the density of the baryonic matter- the main constituent of the, stars. Measurements by two different " research teams, one led by David T~er of the Uniyersity of California in San Diego and the other by Lennox Cowie of Honolulu University's Institute of Astronomy; have yielded contrasting results. Tytler observed very weak deu- terium signals, implying a much greater baryonic density than what is known at present. But the galactic material observed till date <;an account="" for="" a="" small="" percentage="" of="" this="" newlyenvisaged="" baryonic="" density.="">

This observation led Tytle! et al to 4ypothesise that the detected hot gas masses {yet another recent Keck achievement) in the vast inter.galactic spaces may contain the missing baryonic stuff. Cowie's' observations {which report a much stronger deuterium spec. tra), however, undermine the need for the search for the exotic 'missing bary- onic stuff.

Djorgovsky, an expert on the physics of galaxy formation, has extensively focussed on the lithi~m spectra of some possible brown dwarf candidates, Pleadis being the strongest. He also reported the discovery of ScI435+63, the farthest known radi- ogalaxy, at a red shift of 4;25. His team has, besides, successfully observed a quasar called PKS 1614+051 and a cOm- panion galaxy -a binary system -'- at a red shift of3.51.

Keck, of course, is not free from its share of glitches. The hi-tech opcra- tion and focussing of the Telescope is a rather time.consuming affair. NASA holds a one-sixth share on the 'viewing time'. "Anyone who has worked with NASA is aware of whar it is like," Djorgovsky shrugs. The'question of archiving the data gathered by Keck has also remained coritro~ versial. "Of course, the- Hubble Space Telescope programme can afford to do it; it is a us $6 billion project - enough to build 60 Kecks," asserts Djorgovsky.

Then, recently, a Keck 2 has been commissioned. It is an improved v:er&ion of the original Keck, having a wide gamut of visibility in the infra,.red and near infra.red regions too. Ir,i~ projected to be operational sometime this year. Astronomers who are lucky eno~gh to have access to the viewing times of these telescopes can indeed share DjOIovsky's optimism: "We are long overdue for some nice discovery."