A language that only Great Andamanese speak 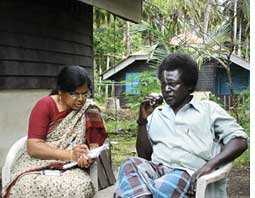 the Great Andamanese tribe speaks a language that no one else in the world does. A study suggests it could be among the few paleolithic languages that exist in the world and may constitute the sixth language family in India.

Anvita Abbi, professor at the School of Languages, Jawaharlal Nehru University, Delhi, and the lead researcher, had observed in 2003 that the Great Andamanese tribe spoke a different language than the Jarawas and the Onges, the other tribes living in the Andaman and Nicobar islands that speak a similar language. In May this year, she confirmed her observations. The result supports a study by Centre for Cellular and Molecular Biology, Hyderabad, in 2005 which said that the Great Andamanese tribe's genetic make up was different from that of the other tribes. The study was published online on April 22 in Language Sciences.

"In 2003, our findings were not conclusive. This time we created a database of the languages spoken in the islands," says Abbi. Grammar, typological features and phonetics were studied. The difference in the way the tribes spoke was determined by the articulation of lips, tongue and vocal folds.

But the language may die soon. There are about 50 speakers of this language left in an islet called Strait Island, 53 km off the coast of Port Blair. Of these, about eight of them speak the language and that too in bits and pieces. "A corrupted form of Hindi called Andamanese Hindi has replaced the original language and hence even the native speakers have to recollect words and their meanings," Abbi says. However, the language had 10 different dialects spoken in the early 18th century. To restore the language, Abbi has compiled more than 5,000 words, now being converted into a trilingual dictionary with translations in English and Hindi besides pictorial and phonetic representation of words.