A matter of mass

The neutrino, an elementary particle, may not be massless, as assumed 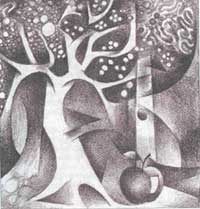 A TEAM of physicists working at the Los Alamos National Laboratory in the us claims that it has gathered experimental evidence suggesting that fundamental particles called neutrinos are not, as believed, massless.

Interestingly, the New York Times printed the story of the discovery, announced in February, even before the findings were reported in any journal or science seminar (Science, Vol 267, No 5199).

Neutrinos have been an enigma since they were first postulated in 1930 to explain certain anom'alies in the process of the radioactive decay of some substances. Neutrinos are extremely elusive because they are neutral and interact weakly with other particles. In.fact, a neutrino could penetrate right through the Earth without interacting with anything at all.

Neutrinos are an essential part of the particle physics' Standard Model - the theoretical framework that provides an understanding of the basic forces and particles of nature. In this model, the neutrinos-- assumed to be massless - are of 3 types, or flavours: the electron- the muonand the tau-neutrinos.

The Los Alamos team used a phenomenon called "neutrino oscillations" to test whether neutrinos are massless. It turns out that if neutrinos have a mass, they can switch from one type to another in their path. These oscillations occur at a rate related to the mass differences of the different flavours of neutrinos. The essential idea in the experiment was to have a neutrino source which has I flavour missing and then, after the neutrinos travel for a distance, to try and see if the missing flavour shows up.

The experiment at the Los Alamos Meson Physics Facility used a proton beam with a shielded water t4rget. The interaction generated showers of various elementary particles, including neutrinos and antineutrinos of the muon variety. These were then allowed to travel about 30 metres into a Liquid Scintillator Neutrino Detector - a 200,000 litre tank filled with a com pound that emits flashes of light when certain interactions occur. This light was measured by an array of 1,220 light detecting instruments called photomultiplier tubes. The scintillator was designed to be sensitive to electron antineutrinos, a flavour that was absent from the original source. It follows that any signal detecting such a particle is a clear indication of neutrino oscillations.

The team reported 80 such events, 40 more than can be accounted for by any conceivable background interferences such as cosmic ray interactions in the atmosphere or some other radioactive source. The inference is that the electron and muon type of neutrinos have masses in the range of 0.5 and 5 electron volts and a mass difference of about 2.4 electron volts. (An electron volt is a unit to measure extremely small masses encountered in particle physics; an electron has a mass of about 500 Ho electron volts.)

The report has led to a flurry of activity among both experimentalists and theorists. Most physicists are a bit cautious about the result and there are already reports from the Rutherford Appleton Laboratory in the UK and the Brookhaven National Laboratory in the us, contradicting the claims of the Los Alamos team.

On the theoretical front, the implications of this discovery are enormous. If neutrinos have a mass, then it indicates that our understanding of the basic forces of nature is incomplete and there is still physics to be explored beyond the Standard Model. This could be in the field of Grand Unified Theories or Supersymmetry.

Surprisingly, perhaps the most profound effect of a neutrino mass would be felt in the realm of cosmology. A massive neutrino would be the natural candidate for 'dark matter', invisible matter believed to comprise the bulk of the mass of the universe.