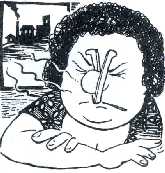 The European Court of Human Rights in Strasbourg has admitted a Spanish mother's complaint that the environmental nuisance caused by an unlicensed waste treatment plant adjoining her house is a violation of her human rights. Gregoria Lopez Ostra contendss the smell and pollution from the plant treating tannery waste causes health problems and is a nuisance to many area residents. She argues that this is an infringement of Article 8 of the European Convention on Human Rights, which guarantees respect for private and family life. The Spanish government maintains the case is sub judice in national courts. It claims also that the plant has been partially closed and is no more a nuisance. But the Court of Human Rights is unlikely to buy this argument and the Spanish government could be fined for breach of the convention and ordered to comply with it.