A myth is broken 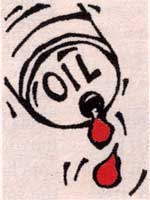 ALL predictions about the world having sufficient oil stocks for the next 30 years may have been a lot of wishful thinking after all. A recent report from the World Resources Institute (WRI) based in Washington DC, says that oil supplies could start drying up as early as 2007 AD, According to James Mac- Kenzie of the WRI, nearly 40 studies have put the world's reserves of 'ultimately recoverable' oil at between 1,800 and 2,300 billion barrels. Of that, the world has already consumed 765 billion barrels so far.

These predictions might set the alarm bells ringing for governments which are doing little to prepare for the economic fallout of this eventuality, because oil prices are low. But as oil becomes sparser, the increasing cost and difficulty of extraction could lead to a decline in the rate of production sometime between 2007 and 2014 AD. Many of the claims on reserves made by oil- producing nations were not reliable, said MacKenzie. Even if the oil stocks exist as they claim, they will defer the fall in supply by a decade only.