A new technique shall help do away with unwanted, polluting byproducts of certain manufacturing processes 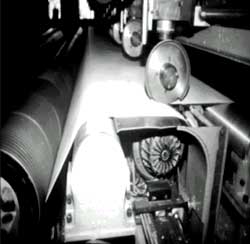 manufactured products often contain unnecessary and undesirable chemicals which are generated during the production process. These chemicals are potential polluters of the environment. Ideally, it should be possible to modify the manufacturing process so as to be able to remove such unwanted substances without endangering the quality and essential properties of the product itself. One possible approach to the problem is to develop and introduce a biotechnological stage in the manufacturing process wherein suitable biocatalysts could be used to reduce the polluting byproducts, without having to evolve an entirely new product or production process.

Carbury Herne Limited of Cardiff, uk, in association with Hercules Incorporated, a chemical company based in Wilmington, Delaware, us, has developed a bioprocessing system using the above approach to reduce unwanted contaminants in chemicals used to impart wet strength to paper. Products such as tissues, towels and packaging materials need an extra measure of strength when wet, if they are to perform properly.

Such a property is rendered to the paper by a polymer which is produced by a chemical reaction between a substance called epichlorohydrin and a solution of a poly or aminoamide. Unfortunately, traces of contaminants like haloalcohol are produced as a byproduct of this chemical reaction. The most commonly found byproducts are two compounds called 1,3-dichloropropane-2-ol (dcp) and 3-chloropropanediol (cpd).

Researchers at Carbury Herne Limited have succeeded in developing strains of bacteria which can assimilate haloalcohols very fast and break them down into harmless substances. In the case of dcp, it is first converted into epichlorohydrin and then into cpd - the other contaminant. cpd is converted into glycidon and then into glycerol, before being finally broken down into carbon dioxide, water, chlorine ions and non-polluting biomass.

According to researchers, tests had been carried out using a combination of two different strains of bacteria which were bred in the laboratory and then fed into the bioprocessing unit filled with chemicals used to impart wet strength to paper. An additional processing stage accompanied the bioreaction in which the product was stabilised by reducing the ph and eliminating surplus bacteria. The resulting wet strength chemical - without dcp and cpd - could then be fed into the paper production process as usual.

Scientists have also tried to employ different combinations of the strains of bacteria to develop the mixture that produces the best results. To ensure an efficient dissimilation of the two contaminants, the composition of the bacterial mixture is quite critical. The bacterial mixture is highly sensitive to variations in temperature. While exploring the possibility of using this new technology on a worldwide basis, Carbury Herne's scientists have found that variation in the quality of water used, also affects the mixture.

Further tests have shown that this technology could reduce the levels of contaminants like dcp and cpd in the wet strength chemical to the minimum detection level. "Later trials of the process on a commercial scale indicate that the technology is both reliable and predictable," say researchers at Carbury Herne. Apart from being environmentally-acceptable, the process is also rather inexpensive when compared to the other option of developing a new product or manufacturing process to achieve the same.

This process has now been adopted by two manufacturing plants. Carbury Herne is now developing the concept to suit other products and manufacturing processes.