A pain in the back 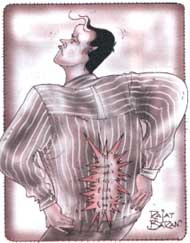 CHIROPRACTIC is a system of treatment where the backbone is treated mainly by manipulations. The treatment does not prescribe drugs or chemicals. It has almost no appeal among pharmaceuticals. And its effectiveness and safety has been questioned more often than not by cynics, other medical professionals and even the public. But cynicism and distrust on this type of treatment for back problems is waning. And scientific evidence is approving chiropractic as both effective and safe.

Using a manipulative technique, chiropractors diagnose and treat conditions caused by the mechanical dysfunction of joints and the effects they have on the nervous system. A 1990 study, published in the British Medical Journal, had compared chiropractic pain with hospital treatment for back ache. The study put chiropractic one up for effectiveness over the allopathic treatment in the hospital. This finding was followed by other researchers. All of them gave chiropractic its due credit.

However, with no legal status available for this form of treatment, chiropractors are yet to instil confidence in the hundreds of people who definitely need their assistance.

In the United Kingdom, there are no laws barring chiropractors from practising their trade. But, countries such as France, Spain and Belgium are not lenient when it comes to practising this form of medicine. A conventional medical qualification is a must to get a licence to practice chiropractic.

In 1997, Danish researchers at the World Chiropractic Congress held in Tokyo presented results showing that chiropractic reduced the duration of headaches by 69 per cent, compared with 37 per cent with massage. It also reduced the number of painkillers needed by 36 per cent. Another study conducted by Dutch researchers showed that for shoulder pain arising from disorders of the spine or upper ribs, chiropractic manipulation was very effective.

Despite the success of chiropractic treatment, doubts have been raised about the effectiveness of the treatment. These largely stem from the inaccurate use of the term. Alan Terret, an Australian professor of health science, reported that many of the "chiropractic manipulations" were not performed by chiropractors.

Keeping the risks of chiropractic practice in perspective, it was reported by The Independent that the treatment can result in cardiovascular damage in a number of cases. Based on published cases and insurance reports, complications from genuine chiropractic manipulations to the neck are, at worst, one in 500,000 patients treated. That amounts to a mere 0.0002 per cent. The choice is yours: painkillers that weaken your immune system or a manipulative technique that may soothe you. In contrast to this, another study reported that nonsteroidal drug carry a risk of 0.04 per cent.