A penchant for adultery

Most birds are adulterous, find bird-watchers, and contrary to earlier beliefs, it is the females who have a roving eye 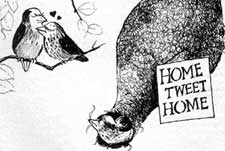 BIRD-WATCHERS, studying the mating habits of different species since the early 1970s, are discovering that faithlessness is common and most birds fancy a romp outside their nest. The cuckoo's waywardness is well-known, but this is so even among birds hitherto thought to be monogamous, such as the guillemot (Uria aalgae), mallard duck (Anas platyrhychos), pied flycatcher (Malurus spendens) and white-crowned sparrow (Zonotrichia luecophrus). And what's even more surprising, it is the female bird that has a penchant for adultery.

Scientists say these observations support the theory of "sperm competition", a phrase that describes the physiological and behavioural responses of males and females of all living species. The term was coined by Geoffrey Parker of the University of Liverpool, a pioneer in the field of animal behaviour. This "competition" arises not only out of an "unconscious urge to pass on genes", according to researchers Tim Birkhead of the University of Sheffield and Anders Meller of the University of Uppsala (New Scientist Vol. 135 No. 1828), but also to possibly "improve the genetic make-up of (the) offspring".

Genetically superior males would produce "sexy" male offspring who are more attractive to females and they would, in turn, be more likely to produce attractive offspring of their own, thus ensuring continuation of a superior genetic species that also would be more vigorous and resistant to parasites and other pathogens.

A breakthrough in the study of sperm competition came in 1985 when Alec Jeffries of the University of Leicester discovered that each human being has a unique set of DNA fragments that can be detected through "fingerprinting". Birds have been found to be particularly suitable subjects for fingerprinting as, unlike mammals, their red blood cells have nuclei.

Longevity seems to be one indication of prime genes among birds. In a study of the North American purple martin (Progne subis), Eugene Morton, of the Smithsonian Institution in Washington DC, found that, typically, an old male monopolised a group of nest sites, paired with one female, and, when she was no longer fertile, actively encouraged young males to use the remaining nest sites with young females. The old male then copulated with these females and was ultimately found to have fathered as many as 70 per cent of the offspring of the females.

A subject under current study is whether adulterous copulations are timed among birds to coincide with greater or lesser potency of the male. A study of the zebra finch (Taeniopygia guttata) in Australia showed the male remains faithful during the weeks of copulating with one partner. It also revealed that as soon as this period ended, the male would copulate with other females and produce twice as much sperm. This line of enquiry raises the question, yet unanswered, whether the number of sperm for transfer during sex can be controlled.

The potency of male birds is of particular importance because of the extreme hostility of the female's reproductive tract to sperm. Biologists believe many sperm fall victim following insemination to specific immune responses in the female's long and circuitous tract.

Studies at breeding grounds have indicated that it is the early female bird that gets first choice of the males and the late-comers have to be content with the less-desirable males with poor genes. But to female birds who wish to breed, even these poor males are preferable to no males at all. A 12-year study of a colony of blue tits, by Bart Kempenaers of the University of Antwerp, showed females that had paired with "unattractive" males were far more likely to seek adulterous copulations with better quality males and produce offspring. Other studies have shown young females with young mates are more adulterous than older females paired with older males. And, all these feverish sexual liaisons occur even though the male tries his hardest to guard against being cuckolded. A male magpie (Pica pica), for example, will shadow his female closely during her mating period so that he can prevent another male from attempting to copulate with her.

Sperm competition was first studied among insects because birds were not considered promising subjects as it was believed more than 90 per cent of them were monogamous. Even after bird studies began in the early 1970s, these focussed on the feathered male mainly because it is the male who is most "conspicuously eager for extra-pair sex". However, after much painstaking research, behavioural ecologists concluded that "such notions were founded on the blinkered observations of male chauvinists".

With more and more fingerprinting studies being published, scientists expect to establish that sperm competition is widespread among all animal species -- and not just among birds.