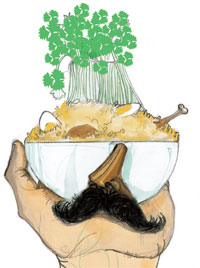 Aadhaar card and rural mobile telephony are often seen as harbingers of change in rural India. Though the card is at an incipient stage, change is palpable. For plants at least. A coriander plant in rural Andhra Pradesh received its unique identification number and of course a card for itself with the photo of a mobile phone.

An Aadhaar card with number 4991 1866 524 was issued in the name of Mr Kothimeer (coriander), son of Mr Palav (biryani), Mamidikaya Vuru (village raw mango), of Jambuladinne in Andhra Pradesh’s Anantapur district. As the card displayed the photo of a mobile phone, officials have no clue of the address where the card has to be delivered.

“It’s probably the work of a young man who wanted to tell us how routine the process of data collection was in villages. The private agencies entrusted with the job have no understanding of the job in hand,” Payyavula Keshav, a Telugu Desam Party MLA from Anantapur told Deccan Herald. Revenue officials said they would trace out the agency that completed the enumeration work in Jambuladinne to pinpoint the responsibility of issuing a card to a mobile phone named Coriander.