A pioneer in many ways 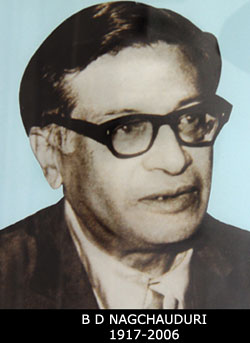 B D Nagchaudhuri who passed away on June 24, 2006, was among the pioneers of nuclear and environmental sciences in India. Handpicked by the illustrious Meghnad Saha to do a PhD at Berkeley, Nagchaudhuri was among the first Indians to study at that institution. He returned to India, after completing his doctoral research to set up the country's first cyclotron -- an apparatus for accelerating charged atomic particles revolving in a magnetic field in an electrical field. He had, perhaps, thought of developing the apparatus before leaving India, and quite likely had his mentor's support.

The establishment of the cyclotron was not an easy task. Several parts of the particle accelerator required special materials. Some required machining. And then certain tasks were simply too onerous for the existing machine shops. There had to be concurrent development in other technologies and infrastructure to establish a cyclotron.

For instance, the cyclotron required special effort from engineers at the Heavy Engineering Corporation at Ranchi; Nagchaudhuri and his team worked closely with these professionals. And each department and institution, he worked with benefited from developments in high-end physics.

These interactions stood Nagchauduri in good stead when he functioned as defence advisor to the government of India during a crucial phase of the country's nuclear programmes. Prime minister Indira Gandhi had assigned him the task of initiating a high-secret feasibility study for building long-range ballistic missiles -- a task in which Nagchaudhuri excelled.

Nagchaudhuri used language as dexterously as he used science to solve technical problems. On one instance, he announced -- as defence advisor -- we did not explode any bomb but 'imploded' it.

Nagchaudhuri was a powerful science communicator. He wrote a popular newspaper column on scientific research and also edited the popular magazine, Science and Culture. As an educational administrator, too, he made a contribution, being vice-chancellor of Jawaharlal Nehru University between 1974 and 1978, its formative phase.

Now let me turn to Nagchaudhuri's remarkable contribution to environmental management in the country. He laid the foundation for the current day Ministry for Environment and Forests. The emphasis on synthesising knowledge from various scientific disciplines and investigating apparently conflicting conclusions of diverse disciplines to bring about a greater clarity in understanding the country's complex environmental problems was his forte. Nagchaudhuri wrote several books. One small but very thought-provoking work of his is Environmental Management.

Nuclear and environmental science has often been presented as antagonistic disciplines. But visionaries like Nagchaudhuri ensured a fruitful interaction between the two.

And it's to the credit of people like him that the Indian scientific research is today rated among the best in the world -- whatever our quibbles.

R Sreedhar was closely associated with B D Nagchaudhuri since 1985. He is attempting a book on Nagchaudhuri's thoughts and works