A plan to fortify Orissa's tanks 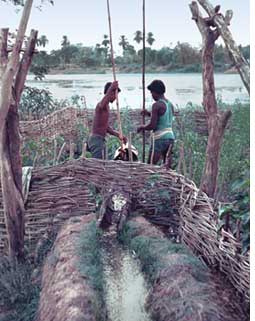 Pani panchayats to manage tanks, pay a part of the cost

A WORLD bank-funded project to rebuild irrigation tanks across Orissa to improve agricultural productivity and provide livelihood support to villagers may flounder like several such schemes in the past. The Rs 546-crore Orissa Community Tank Management Project (octmp) is being implemented in 29 of the 30 districts, including the most backward Kalahandi-Balangir-Koraput belt.

Nine hundred water tanks capable of irrigating 120,000 hectares (ha) have been identified by the government for repairs. Once they are ready, they would be handed over to water users' associations, or pani panchayats, for maintenance. The project, to be completed by 2013, will make the water users more responsible; they will have to pay a small part of the cost of construction and volunteer labour.

"Making the villagers stakeholders in the project is a good idea, but motivating the pani panchayats to pay this amount is not easy. In larger projects where costs are high, people would be very reluctant to pay," said Manmohan Pradhan, executive secretary of Agranee, one of the key non-profits involved in the execution of the project in Mayurbhanj district.


Lack of awareness made it extremely difficult to motivate the members to pay, said Sarat Chandra Mahant, secretary of Tangabila pani panchayat in Mayurbhanj. "Most of them want to know why they should pay for a government project despite holding several meetings to make them understand that the irrigation system will be a common property," Mahant added. The bigger challenge, however, would be to train the associations to manage the tanks and irrigation canals, said Surendra Kumar Sahu, deputy director of Water and Land Management Institute (walmi) in Cuttack. "The biggest challenge is improving the system. Experience shows that pani panchayats failed to manage schemes handed over to them because they did not get adequate training and knowledge," said Sahu. Usually the training programmes are carried out hurriedly and villagers find themselves unable to manage the system, he added.

Many are not aware of the exact nature of the project. All that P Apparao, treasurer of Polinaidu Tank Water Users' Association of Kidigami village in Gajpati district, knows is that some work will be carried out at the two tanks in his village. "If it is for our good, we will pay what they ask for. But till date no one has told us how much is to be paid," said Apparao.


The project has four aspects--improving tank systems, extending livelihood support, institutional improvement and project management. Institutional strengthening involves training of members of the water panchayats responsible for implementing the projects along with government agencies like walmi and the Institute of Management On Agricultural Extension (image).

"They will train the pani panchayats to manage the tanks, distribute water and assess crop requirement," said Sanat Mishra, the project's livelihood expert. Nine hundred of the 3,646 large irrigation tanks in the state were selected after considering the demographic profile, hydrological feasibility and commitment of the respective pani panchayats.

"We have tried to take up areas with sizeable proportion of Scheduled Castes and Scheduled Tribes. Willingness of the pani panchayats to pay their share and factors like the storage capacity of the tank were other considerations," Mishra said.

Non-profits, however, said it would have made more sense to take up 25,000 smaller irrigation tanks under the project. The small irrigation tanks are directly supervised by the gram panchayats and these could have been managed more easily, Sahu said. "It is unfortunate that the government has kept these tanks out of the scheme. Their management would have been much easier and more beneficial for the farmers."


Despite the misgivings of non-profits, senior project officials are optimistic that community involvement will translate into success. Sisir Behera, an economist responsible for evaluating the project, said community involvement would ensure that the pani panchayats shoulder the responsibility once the irrigation tanks are transferred to them.

The Orissa Lift Irrigation Corporation, however, has a different perspective. The corporation claims that it had handed over 12,788 lift irrigation points for irrigating fields on higher levels to water panchayats for management during the last six years. Now more than 2,000 of them are lying defunct. "Internal politics among the pani panchayat members is the main reason for the failure of lift irrigation," said R N Acharya, deputy director of the corporation, looking after planning, monitoring, evaluation and statistics.

The state government plans to plug these loopholes by amending the Orissa Pani Panchayat Act, 2002. "We propose to make pani panchayats permanent bodies wherein each member will serve for six years," Mishra said. These panchayats will also have more broad-based representation with one-third of the seats reserved for women. Landless fishers will be made members as their livelihoods are closely linked to the water bodies, he added.

The non-profits roped in to motivate the pani panchayats said training of water associations, cost sharing and working out livelihood plan alone would not ensure the project's success. They can create awareness and act as intermediaries between the people and the government, but the outcome would depend on the confidence and autonomy of the pani panchayats. "They should be made self-reliant. Their governing bodies must be able to decide which crop to grow and how to optimize the yield," said Sahu.

A Jagannath Raju, president of the Centre for Community Development, another non-profit working in the backward district of Gajpati, said that almost all members of the pani panchayats have political affiliations and are not willing to shell out money. "Idealism does not help. The harsh reality is that there is a lot of politics in pani panchayats."


Many ambitious irrigation and livelihood support projects in the past have failed to achieve the desired results. Recently concluded projects have had limited success as they failed to enthuse the farmers. They include the Rs 1,391-crore World Bank-aided Orissa Water Consolidation Project, the European Commission-funded Rs 67-crore Orissa Minor Irrigation Project and the ongoing UK-funded Rs 38-crore Watershed Management Project, which is supporting Western Orissa Rural Livelihood Project.

Government sources said the basic flaw in these projects was that they failed to inspire the farmers and did not involve them in decision-making. The officials involved with these projects did not frame sound operational rules that later led to confusion, sources said.

Like the ongoing Asian Development Bank-supported Orissa Integrated Irrigated Agriculture and Water Management Investment Project, which aims to maximize the state's irrigation potential and reduce poverty, octmp is also making slow progress because of the bureaucratic approach, government officials said. All segments of the project are at a preliminary stage.

While an independent project monitoring and evaluation agency is yet to be hired, the pani panchayats are still not convinced about the benefits of the project. "Unless the farmers and other water users are motivated at the very outset, the project will be a flop," said Pradhan of Agranee.