A new detergent can help reduce waste emissions during dry-cleaning 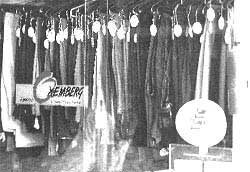 chemists in the us have developed carbon dioxide ( co2 ) soluble detergents that could be used for dry-cleaning purposes. The liquid co2 would be used in dry cleaning machines as a solvent. With the use of the detergents, dry-cleaners would lose their characteristic smell. The detergent would also reduce the amount of toxic waste produced during cleaning process (New Scientist , Vol 155, No 2097).

Researchers at the University of North Carolina, Chapel Hill, say that once the cleaning part is over, the liquid co2 can be evaporated off, collected, liquefied and used again. They faced problem in developing the technique because co2 is not a good solvent.So they tried to find a right detergent for co2. The molecules of detergents used as washing liquid have two different chemical properties. One has liking for water and another sticks to dirt.

A company called MiCell is expected to sell the first liquid co2 dry-cleaning machine during next year. An important feature of the machine is that it cuts waste and pollution produced during dry-cleaning process. Brad Lienhart, president of MiCell says that company would be able to sell nearly 100 machines in the first year of business.