The vast grasslands in USA are finally making a comeback 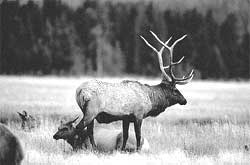 they are called "prairie remnants" by some people. Forgotten strips of land in the corners of farm fields or the rough of some golf courses. These are the few remaining pockets of the once-vast American prairie. They are left to sustain the diversity of life in what was at one time a vast sea of grasses and flowering plants. The robust gene pool has been reduced to a series of shallow gene puddles. Most of the plant species have disappeared and along with it the animal and bird diversity.

Now the vastness is making a comeback. So are buffalo and elk and a variety of plant species. In the aptly-named town of Prairie City, Iowa, scientists have begun work to restore the former glory of the grasslands. Their area of work is the Neal Smith National Wildlife Refuge, a project of the United States Fish and Wildlife Service.Spread over 2,023 hectares (ha), it is the scene of one of the most ambitious efforts to "restitch the torn fabric of the grasslands".

"In 1991, when we surveyed this area, it was a farmed landscape," said Pauline Drobney, a biologist who works at the refuge. "It was just a big chunk of land available to start a refuge on," she adds.

The land, 1,456 ha at that time, was owned by Iowa Light and Power company, which had planned to set up a nuclear power plant. When the plan was abandoned, the land went on sale. Neal Smith, then a Congress legislator representing Prairie City, managed to pressurise the government to acquire the land and set up the refuge. The land was acquired at market rates.
A mature prairie contains 150 to 200 species of plants, all of which have local variants. But searching for them was indeed a Herculean task, especially when commercially available ones cost as much as us $75 for a mere 28 grammes.

Drobney hired five people, who for two-and-a-half months travelled across 38 Iowa counties. Their search yielded about 2,000 remnants of native species. "Some of them were very tiny," says Drobney, adding: "You take bits of this gene pool and bits of that gene pool, you bring these together and then you have the genetic exchange. That gene flow is possible once again on at least this piece of land."

After eight years of research, the genes are indeed flowing again in Prairie City. Over a period of time, the refuge has had to rely less on seeds from outside sources, instead harvesting its own seeds for replanting. Over the last two years, 9,072 kilogrammes of seeds have been gathered.

Drobney now takes visitors wading through grasses up to 3.65 metres high. You can find Canada Wild Rye, Big Bluestem, Little Bluestem, Indian Grass and a host of other species. A herd of 42 bison and nine elk roam the expanse of the grasslands, which includes a roadway allowing visitors to get close. Everywhere, there are different species of plants, insects, snakes and birds, a sign that the grasslands are making a comeback.