A ray of hope for leprosy patients

Two groups of Indian scientists have developed anti-leprosy vaccines that they claim are also effective in helping victims recover. 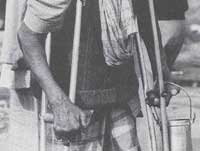 LEPROSY afflicts about 12 million people worldwide, of which about a third are in India. Though the bacteria that causes leprosy -- Mycobacterium leprae -- was discovered 100 years ago, it is only recently that Indian scientists at the Cancer Research Institute (CRI) in Bombay and at the National Institute of Immunology (NII) in New Delhi -- working independently -- have come up with two candidate vaccines against the disease. They claim the vaccines not only offer protection to healthy people against the disease, but also improve the condition of some leprosy patients.

Interestingly, clinical manifestations of leprosy are diverse, ranging from tuberculoid to lepromatous forms. Tuberculoid leprosy affects the nerves and leads to patchy lesions. There is high immunity against the bacteria, which are present in small numbers in the patient's tissues and blood. In the lepromatous type, the patient's body is covered with diffuse lesions, the bacteria thrive in the bloodstream and the immune system is virtually non-functional against the bacteria.

Only 5 to 10 per cent of humans lack an innate immunity against leprosy, while the rest are resistant to the disease.
The CRI team led by institute director M G Deo, has worked on finding a leprosy vaccine for almost two decades. Because the leprosy bacteria is impossible to culture in the lab and because there are few animals, other than the armadillo that is found only in South America, that can be used to grow the bacteria, it has been very difficult to produce an effective vaccine in large quantities. However, the CRI team overcame this problem when one of the scientists isolated a related Mycobacterium strain, named the ICRC strain, from the lesions of a leprosy patient.

From as early as 1979, the CRI team has put its vaccine through a series of rigorous trials, in which 100 lepromatous leprosy patients on drug therapy and 50 healthy people who displayed high susceptibility to the disease were vaccinated. The scientists found the vaccine helped to build up the immunity of leprosy patients and the number of bacteria in the tissue of these patients decreased. And, 95 per cent of the healthy people who were susceptible to the disease became immune to it.

The CRI team is now conducting a large-scale vaccine trial, which started in February 1987. So far, 34,000 people who are in close contact with leprosy patients have been vaccinated in southeastern Maharashtra. The team intends to follow the progress of the vaccinated people for ten years, because leprosy has a long incubation period.

Deo is confident about the vaccine his team has developed. He says it is safe and can be administered in a single dose. It is also likely to be cheap to produce in large quantities because it can be developed from a cultivable organism.

The NII team, led by G P Talwar and Rama Mukherjee, followed a similar approach. It developed a vaccine based on a bacterium that is a fast-growing, non-infective, soil-borne bacterium similar to M. leprae and the ICRC variety. The scientists use a heat-killed form of this bacteria as a vaccine.

The NII vaccine has been undergoing clinical trials in north India. Phase II trials were undertaken in Delhi and now the vaccine is in phase III clinical trials. This massive trial -- begun in 1989 -- is being undertaken around Kanpur, where some 1,000 leprosy patients and about 23,000 people who are in close contact with them are receiving the vaccine. The patients are given 2 to 8 doses and the others are given 2 doses. In the Phase II trials undertaken in Delhi, the scientists found that patients with lepromatous leprosy responded very well to the vaccine and patients with less severe forms of the disease developed greater immunity against the disease.