A recipe for global good health 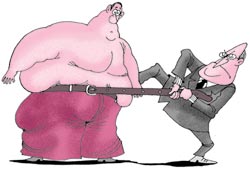 after more than two days of hectic parleys, the World Health Organization's (who) Global Strategy on Diet, Physical Activity and Health was endorsed at the 57th World Health Assembly (wha-57) in Geneva from May 17 to May 22. The plan aims to address two major factors, diet and physical activity, connected with the growing burden of non-communicable diseases. In this regard, it envisages countries evolving policies suited to their domestic environment.

"This is a landmark achievement in global public health policy," said who director-general Lee Jong-wook, adding that it would serve as a powerful instrument to reduce the human and socio-economic costs of non-communicable diseases. With the member states settling for the April 2004 draft of the strategy, most of them lauded its adoption. At the same time, they incorporated their concerns in the resolution approving it. Some felt that there wasn't enough time for talks. "It would have helped to discuss the strategy at one wha and adopt it at the next, since some countries were not able to participate in the Executive Board meetings where the strategy was devised," a delegate at the meeting pointed out.

Indian officials participating in wha-57 said they would first study the incidence of non-communicable diseases in the country, and then develop strategies and set targets in consultation with various stakeholders. Other countries are also expected to do the same. It is hoped that the pressure of having to report on the progress made in this regard by wha-59 in 2006 should yield results. As an Irish delegate put it: "It is not going to happen because the health minister goes back and says this is a very good document. This is going to need champions in each country."
Coming to an agreement at wha-57 was not easy. "It was difficult because each country had a different perspective," pointed out Patricia Lambert of South Africa, also the chairperson of the drafting group that was given the task of resolving differences over the strategy. The main concerns included the potential of the use of trade-distorting measures by developed countries and the requirement for member nations to limit their intake of free sugars.

After nearly eight hours of negotiations, countries decided not to reopen the strategy. To tackle the apprehension about trade-distorting measures, sugar-exporting countries like Brazil succeeded in inserting some paragraphs in the resolution. These suggested that nothing in the strategy "would be construed as a justification for the adoption of trade-restrictive measures or trade-distorting practices". The resolution also asked member states to ensure that their policies were "in accordance with their...commitments in international and multilateral agreements".

Regarding the issue of limiting the intake of free sugars, some predominantly sugar-producing countries argued that sugar consumed in appropriate quantities had health benefits. They contended that it would not be right to "demonise" sugar products as that could lead to an unnecessary decrease in consumption and possibly have serious repercussions in some developing countries. To address this concern, a paragraph was added to the resolution. It stated that appropriate levels of intakes for energy, nutrients and foods, "including free sugars, salt, fats, fruits, vegetables, legumes, whole grains and nuts" would have to be determined. These would be in accordance with "national" dietary and physical activity guidelines.
There were other contested issues with the strategy as well. These included the emphasis on the need for countries to change agricultural practices and adopt fiscal measures for improving dietary habits; the lack of any reference to malnutrition and undernutrition -- an issue raised by many developing countries; the need to emphasise the role of traditional dietary and physical activity practices; and the implication of saturated fats being "bad" -- a point raised by the Philippines in view of the strategy calling for shifting fat consumption from saturated to unsaturated fats. While the first three issues were dealt with through appropriate inclusions in the resolution, the last one could not be addressed because the subject was too scientific. This might have required an amendment in the strategy itself.

Negotiations finally concluded on the morning of the final day. "It was possible because delegates were prepared to listen, they were constructive and accommodating," said Lambert. The atmosphere had not been so congenial in the months leading up to wha-57 and the strategy had been widely criticised (see: 'Fat chance', Down To Earth, May 15, 2004). Even the industry, which had earlier opposed the strategy, came out strongly in favour of the revised draft. In a joint statement on behalf of the food and beverages industry, the Grocery Manufacturers of America and the Confederation of the Food and Drink Industries of the European Union applauded the wha for adopting this "critically important" and "thoughtfully drafted" strategy.