A retired railway officer knows how to save water and energy

R K Palhan, former general manager, Central Railways, has two innovations to his credit. One has already been implemented in most railway stations under Central Railways, and the other will take off next year. Media-shy, Palhan believes these small changes, if adopted with active government support, can usher in a silent revolution in the country 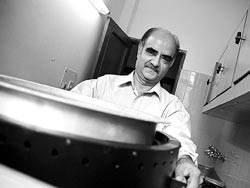 R K Palhan, former general manager, Central Railways, has two innovations to his credit. One has already been implemented in most railway stations under Central Railways, and the other will take off next year. Media-shy, Palhan believes these small changes, if adopted with active government support, can usher in a silent revolution in the country.

In the early 1990s, he was posted as divisional manager at Nagpur in Maharashtra. "During those days, the Vidarbha region was facing acute drought conditions. There was a continuous shortage of municipal water supply -- 8-13 lakh litres per day -- to Nagpur railway station. This forced me to look for alternatives. After studying the design of flushing cisterns at the railway stations, I thought of a simple way to save three to four litres of water per flushing activity. We implemented it and it worked wonders," recalls Palhan.

Palhan's innovation is simple, takes about 15 minutes and can be carried out by unskilled labour. As he explains: Conventional large-sized cisterns (fixed in British times) consume at least 12-14 litres of water per flush. This can be reduced by drilling a hole in the bell-dome. The leakage of air through the hole disrupts the siphon action at the appropriate time. The siphon action is initiated by removing air from the pipe, which leads to flow of water. But the modification leaves behind 3.5 litres. Assuming one cistern is used 10 times a day, it is possible to conserve 350 litres per day per cistern.

Palhan modified flushing systems wherever he was posted. After Nagpur, he moved to Mumbai, and 500 three-gallon cisterns were modified in the Bombay vt area of Central Railway. In five years, it helped save 32 million litres of water. According to Palhan, large flushing systems at Ajni, Nagpur, Wardha, Balharshah and Amla railway stations have been modified. Even the World Health Organization approves of this method.

But sadly, this revolution remained limited to Central Railways. Palhan did write to local municipalities to adopt this model in cities, but they refused on the pretext that municipal officials could not go to people's houses and modify cisterns! Palhan shows a letter dated 10.6.1992, which he wrote to the then chief minister of Maharashtra, Sudhakar Rao Naik, urging him to promote this modification. He received no reply. Palhan is now retired. And no one cares to promote a simple way to conserve water. Perhaps our politicians prefer to cry hoarse over water scarcity. Why do they love water trains?
Palhan has also developed a small appliance, which he calls sona (acronym for Saving of Non-renewable Assets). He claims that by using this appliance while cooking, almost 30 per cent of lpg can be saved. He has carried out tests. He estimates that using this device can help the country save Rs 2,500 crore per annum!

Explains Palhan: while cooking, a lot of heat is lost from the sides of the flame. If this heat is captured, it can reduce lpg consumption, as the food will be cooked faster. This is exactly what sona does. It can be fitted around the cooking vessel, whereby it captures heat and circulates it.

The cost of sona ranges from Rs 1,000 to Rs 5,000, depending on the size. Palhan claims that within three to five years, a consumer can reclaim the cost of the device. Both the Indian Oil Corporation and the National Environmental Engineering Research Institute have tested this device. The Union ministry of petroleum and natural gas is testing it. If the results are satisfactory, the ministry might make its use mandatory. Maurya Sheraton Hotel in Delhi has already shown interest in sona. Hopefully, Palhan will receive due recognition for thinking through the little ways that make for a more conservation-conscious life.