A reversal of time! 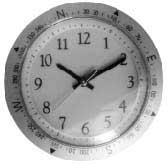 the concept of 'dark matter' has been used by cosmologists to explain movement of galaxies. It is proposed that this kind of matter could originate in a future phase of contraction of the universe, which is believed to be expanding at present. Now, Lawrence Schulman of Clarkson University in Potsdam, New York, usa , has come up with some calculations, claiming that the Universe may contain some regions where time runs backwards. The theory of time running backwards could help explain invisible 'dark matter'.

A simple explanation of the theory of time running backwards can really set the human imagination off. If applied to our present world, it would imply that dead people come back to life and start getting younger by the day, babies get unborn, a broken piece of glass would reassemble, milk would stir itself out of coffee and eggs would unbreak.

But for all these things to happen would require a colossal amount of coordination. For instance, all the pieces of egg shell would need to follow the exact trajectories to re-form into the egg. Theorists have estimated that the slightest interaction with a region that has normal time would destroy the opposite "arrow of time" ( New Scientist , Vol 164, No 2214).

However, Schulman's calculations indicate that this might not be so. "The problem in thinking about opposite arrows of time is to define the question sensibly. Once you have the right context, statistical physics shows that opposing arrows are actually compatible," Schulman observes. The next question has to do with the genesis of a reverse-time region. Schulman is of the opinion that they may be relics from the far future. This possibility relies on the assumption that the expanding universe will eventually begin to contract into a "big crunch". If this happens -- and it is a big "if" -- the "thermodynamic arrow of time" may reverse during the "crunch", creating order out of chaos. The first person to propose this theory was Thomas Gold of Cornell University.

"Because of the opposite-running time, anyone around in this phase would actually see the contraction as an expansion," says Schulman. One conclusion from this theory -- quite fantastic, really -- is that reverse-time regions from the contracting phase could be around us today, possibly as close as a few tens of light years. As these regions are from the far future, any star would have long burnt out, though they would not have reignited under the reverse-time effect. "But," says Schulman, "we would still feel their gravity. Such matter would have all the attributes of dark matter." On the contrary, dark matter could be normal-time matter that has already collided with reverse-time matter from the future, creating matter that has no time direction. "Once again, it would appear like dark matter," says Schulman.

But some pieces of the theoretic jigsaw puzzle are still missing. "My guess is that the paradox goes away if the problem is well posed, but I haven't yet shown it." If time does not run backwards, we may have a sound theoretical explanation in the near future. Or is it the past?