A ritual offer of nothing

On June 16, Prime Minister Atal Bihari Vajpayee's exhortation to "implement the river conservation programme with a greater sense of urgency and commitment" was an allusive reference to the states' tardiness and cursoriness in executing sanctioned projects. What he mentioned even more obliquely was that the plan itself needed drastic course correction 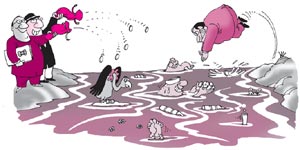 On June 16, Prime Minister (pm) Atal Bihari Vajpayee's exhortation to "implement the river conservation programme with a greater sense of urgency and commitment" was an allusive reference to the states' tardiness and cursoriness in executing sanctioned projects. What he mentioned even more obliquely was that the plan itself needed drastic course correction. Or else, why would rivers become more polluted despite nearly Rs 1670 crore having been spent on cleaning them?

The pm was speaking in New Delhi at the 11th meeting of the National River Conservation Authority (nrca) -- the nodal body mandated to decontaminate the country's major waterbodies through the Rs 4,064-crore National River Conservation Plan (nrcp). "We ended up merely skimming the surface (despite the review taking place after a gap of 30 months)," points out a member of the authority. "In all likelihood, the pm talked in generalities because he wasn't kept posted on the nitty-gritty of the matter," he alleges. The events preceding the meeting do suggest that Vajpayee, who also heads the nrca, was fed selective information.

The Union ministry of environment and forests (moef) had prepared an internal background note on the progress of the plan. The financial aspect apart, it used data to illustrate how the quality of Ganga river's water had improved as a result of the almost-two-decade-old programme. But these figures masked the true picture. There was no mention of details such as non-functional sewage treatment plants (stps), defunct crematoriums and a river in a much worse condition. "All the murky portions of the nrcp and its predecessor, the Ganga Action Plan (gap), were glossed over," asserts the nrca member.
gap was launched in 1985 and the Central Ganga Authority (cga) was established soon afterwards as its policymaking arm. The project was the brainchild of the then pm, Rajiv Gandhi. "It was originally meant to be a multipurpose programme," reveals cga's first head, K C Sivaramakrisnan. "Under it, a number of remedial measures were suggested. They included interception and diversion of sewage, handling of industrial waste and enrichment of the river's biodiversity to enhance its self-cleaning properties," he adds.

Sivaramakrisnan, however, concedes: "Over a period, the focus of the programme narrowed to setting up of stps only." Brij Gopal, professor at the School of Environmental Sciences, Jawaharlal Nehru University, New Delhi, feels: "Right at the outset, gap was premised on erroneous assumptions like sewage treatment being a panacea for cleaning rivers. The waterbodies were never seen as a complete ecosystem." When asked to explain the anomaly, Sivaramakrisnan passes the buck to subsequent regimes which "politicised the entire plan". Apparently wiser with hindsight, he too echoes the critics' standpoint: "Instead of National River Conservation Authority it should be called National Sewage Treatment Plant Authority."

The first phase of gap was scheduled for completion in March 1990. But the Union government finally declared it closed in 2000. Though a whopping Rs 452 crore was spent during this stage, many of the 261 sanctioned schemes are in a shambles.

Intriguingly, despite its turning out to be a damp squib, successive governments continued to implement the programme. cpcb additional director R C Trivedi explains: "Out of more than 3300 million litres per day (mld) of sewage generated in Delhi, only about 1500 mld is treated." The fact is that most states have failed to create adequate stp capacity -- one of the key indicators of progress under nrcp.

Another factor that has hampered the process is lack of proper operation and maintenance (o&m) of assets created under the programme. In 2001, a cpcb report on gap submitted to the Supreme Court stated: "Adequate funds are not provided for o&m of stps, particularly in Bihar and up." Trivedi feels: "Municipalities simply cannot handle o&m because most of them are broke."

The cpcb document also notes that a number of stps in up such as those in Jajmau, Kanpur, Varanasi, Naini and Allahabad are under-loaded. In Bihar, the Chhapra stp does not receive any sewage as it is located too far away and there is siltation in the drain. The non-availability of uninterrupted power further impedes the plants' functioning in many places, states the report.

Gopal describes the situation in a nutshell: "The huge investment being made in the plan will count for nothing if the infrastructure lies idle."


On the financial front, the nrca has been facing a perpetual shortage in bringing its ambitious schemes to fruition. The moef has now sought to review its allocation for the projects under the 10th five-year plan. The ministry is seeking more funds despite the fact that the Planning Commission has consented to raise the gross budgetary support from Rs 1417 crore to Rs 1826 crore.

As against this, almost all the state governments are sitting on unspent money. While the entire sums allocated to Goa and Kerala are unutilised, Orissa and West Bengal have used only 3 per cent and 18 per cent of the sanctioned amounts, respectively. Andhra Pradesh, Karnataka, Tamil Nadu, Punjab, Rajasthan, Uttaranchal and Jharkhand have all spent less than half the approved sum.

Though Delhi has used up 99 per cent of the funds, there are hardly any tangible gains. "About Rs 160 crore spent on constructing community toilet complexes under the Yamuna Action Plan (yap) seems to have been frittered away. Most of these toilets are either non-functional or remain locked," reveals an official of the New Delhi Municipal Council. This phase of yap was funded by the Japan Bank of International Cooperation. The bank was so disillusioned with the efforts of Delhi's implementing agencies that it slashed the amount sanctioned for the second phase of yap.

According to an moef official: "Often the money meant for nrcp schemes is diverted to other heads." An environment ministry report states that in Bihar the funds released for gap-i works were reallocated for different purposes by the state government. A similar trend is emerging for schemes under gap-ii as well. The moef also discloses that Jharkhand's Damodar Action Plan, a part of gap phase ii, is stagnating.


Even as the Union government continues to blunder on with nrcp, experts advocate a comprehensive review of the entire exercise. The starting point should not be construction of stps but maintaining a minimum flow in the waterbodies, they stress. "Rivers can never be clean till they are allowed to flow," avers Gopal, adding: "Our engineers have been taught to impound every drop of available water. This mindset will have to change."

Another alternative suggested is decentralisation of sewage treatment. "Mammoth stps have failed to address the problem. In most places, the plants are not connected to the sewerage system. Consequently, they remain unutilised while untreated sewage flows into rivers," remarks the moef official. Gopal concurs: "Sewage needs to be treated where it is generated."

"The Union government alone should not shoulder the responsibility for cleaning rivers. State-level agencies must share the burden," emphasises Sivaramakrisnan. "Why should a mayor be allowed to take refuge in the fund crunch alibi?" asks the moef official and adds: "We have in the past advised municipalities on how they can generate money for o&m, but to no avail."

At present, nrcp also ignores the crucial issue of treating the river ecosystem in its entirety. "Flood plain conservation is most essential. A river regulation zone should be formulated on the lines of the coastal regulation zone to manage activities in the entire flood plain of the waterbody," says Gopal. K Mohan, former advisor, nrcd, favours a legislation-driven overhaul. "Revision of wildlife, forestry and fisheries acts and the enforcement of the measures contained therein will go a long way in conserving water resources," he says.

To be sure, the pm too has felt the need for pertinent modifications in the river cleaning programme. In this regard, he spoke of involving not only the civil society but also religious personalities and institutions. Implicit in t