A river with a difference 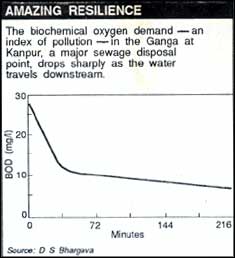 DOES THE ago-old belief in Ganga's incorruptibility hold water? Yes, says environmental engineer D S Bhargava of Roorkee University, who believes that this is what has led to apathy towards the Ganaga.

Unlike other rivers, the Ganga's water doesn't putrefy even after long periods of storage. Unfortunately, very few, if any, studies have been crried out on this quality of the Ganga. Bhargava, using the latest water analysis techniques, has shown no river in the world can cleanse its own Augean stables more efficiently than the Ganga.

During a three-year odyssey (1982-1984) along the Ganga's course, Bhargava discovered the river has a phenomenal capacity to treat large amounts of organic wastes dumped into it. The quantity of these pollutants is determined by an index called biochemical oxygen demand (BOD) -- the amount of dissolved oxygen required by organisms that feed on organic waste. The greater the amount of organic waste and the pathogens feasting on it, higher the BOD.

Bhargava found the BOD in the river at Kanpur, which contributes lavish amounts of untreated wastes to the river, was 27 milligrams/litre, ejrtrsd snpiy 7 km downstream, it fell to 4.5 mg/l. Remarkably enough, a little less than two-thirds of the initial BOD present in the form of a suspension settles down within 30 to 60 minutes at the rate of 3 meters per hour. This, says Bhargava, is 15 to 25 times faster than values reported from other rivers. He believes the cleansing is catalysed by yet-to-be-described microbes whose chemical secretions clump the wastes together so that they become heavy and sink. The remaining BOD -- of soluble waste -- comes down gradually.

Furthermore, Bhargava found the concentrations of disease-causing bacteria, which shot up at the waste-dumping points along the river, reduced dramatically (by almost 90 per cent) within a distance of 7-10 km away.

River-friendly microbes only partly explain the Ganga's superb BOD-reducing capacity. The efficiency with which it captures oxygen from the air, a process called reaeration, also makes for an oxygen-rich, cleaner Ganga. The high DO recovery prevents river-life, such as fish, from dying of lack of oxygen.

"I found the Ganga's DO recovery rate an order of magnitude higher than that of other rivers," says Bhargava. He attributes this ability to Ganga's turbulent motion and an expansive surface area, which enable a better trapping of oxygen molecules.

Ganga's oxygen-retaining capacity could also partly explain why its water doesn't putrefy even over long storage periods, says the environmental engineer. River water begins to putrefy when lack of oxygen promotes the growth of anaerobic (requiring oxygen-free conditions) bacteria, which produce methane that is responsible for the typical odour of water gone stale.

As early as 1896, for example, British physician E Hanbury Hankin had reported in the French journal Annales de l'Institut Pasteur that cholera microbes died within three hours in the Ganga water, but continued to thrive in distilled water even after 48 hours. Significantly, Hankin collected his samples from below the bodies of cholera victims, which were thrown into the Ganga. However, the British doctor found the Ganga water lost its disinfecting property if boiled in an open container. He inferred that some volatile material was behind the disinfecting nature of Ganga.

Around the same time, a French physician, D Herelle, was amazed to find "that only a few feet below the bodies of persons floating in the Ganga who had died of dysentery and cholera, where one would expect millions of germs, there were no germs at all". Similarly, another English physician, C E Nelson, observed that Ganga water taken from the Hooghly (one of the dirtiest mouths of the holy river) on board ships bound for England remained fresh throughout the voyage.

None of these men were able to give any conclusive explanation of their observations, says Bhargava. In fact, it continues to baffle experts and laypersons alike. And, as most of the snowmelt that makes up the river in the upper reaches is diverted into canals, Bhargava wonders what endows the river with such remarkable self-cleansing ability.