A shot in the arm

Humankind may soon to face to face with a miracle if the dozen odd cancer vaccine trials, currently on in the United States, emerge successful 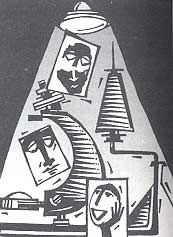 SERIOUS efforts are on in the us to develop vaccines to fight cancer. Cancer could be described as the inability of the body's immune system to recognise a sudden, inexplicable mutation of cells and the manufacture of killer T-CeIIs to destroy these cells. Scientists are not entirely sure as to how cancer cells manage to camouflage themselves while multiplying in and destroying the human body. As far as the treatment of cancer is concerned, many scientists and doctors in the us feel that medical science has hit a dead-end, for solutions like radiation, surgery and chemotherapy are quite ,unsatisfactory. Chemotherapy, for instance, kills healthy cells along with tumour cells and may even leave a few stray cancer cells behind. This is the kind of situation where a vaccine could effectively step in.

The cancer vaccines presently being tested have obtained the blessings of the normally wary us Food and Drug Administration (FDA) and are being tried on patients of colon, ovarian and breast cancers by doctors at medical centers in New York City and the University of California at San Diego, among others. These vaccines aim at prompting the immune system to identify the disease and eliminate it. Patients who respond well to the vaccine create an 'immunological memory' that helps the body recognise and attack new cancer cells elsewhere in the body. And because it is only the body's natural defences that are being triggered, the vaccine is also likely to cause very few side-effects.

The vaccine against malignant melanoma (a tumour of pigment-producing cells) or skin cancer, shows the maximum promise and is one of the most advanced to be developed so far. Melanoma is easy to treat if detected early but is swift and deadly when it metastasises, that is, spreads rapidly and travels through the body. Advanced melanoma is almost impossible to cure either through chemotherapy or surgery. What makes the melanoma vaccine more effective than the rest is the fact that tumours on the surface of the skin are easy to access (to produce vaccines) and also easily monitored during experiments.

There are, however, sceptics who point at the relatively small (10 per cent) success rate of the vaccines that have been employed so, far. But being a fundamentally new treatment, this cannot be a criterion for declaring it a clinical failure or success. Moreover, there are reports which do suggest that the treatment is working better than expected. For example, at a medical centre in Santa Monica, California, the number of patients who received the melanoma vaccine, and are still alive five years later, is 400 per cent greater than was earlier believed.

Apart from being a cancer drug, some enthusiasts are exploring the possibility of developing preventive vaccines too. In fact, Jean-Claude Bystryn, at the New York University (NYU) Medical Center in New York City, is optimistic, especially because his experiments on animals have proved highly successful, so that a preventive vaccine seems close to being a reality. Nine out of the 10 mice he infected with an usually fatal dose of melanoma did not contract the disease on account of being injected with 'a vaccine he developed. But, so far, the vaccines approved in the us are only therapeutic in nature, being used on people who already have the disease. It Will take a while before authorities like the FDA could be convinced to allow healthy persons to be injected with muted cancer cells.

Even though funding for cancer research stiff remains tight - not just in the us but all over the world - an increasing number of pharmaceutical companies are investing in the field. If and when vaccines are brought into wide-spread use cancer may well come to mean little more than an annual visit to the doctor for a booster dose.