A simple yet rare solution 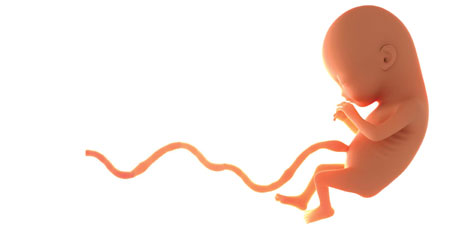 More than 75 per cent infants in India suffer from anaemia or iron deficiency, says a National Family Health Survey conducted in 2006. The problem can be reduced substantially if doctors wait for two to three minutes before cutting the umbilical cord during childbirth. Unfortunately, most doctors prefer not to wait before they clamp the cord.

The umbilical cord provides nutrition and blood to the baby from the mother. For many years, researchers have pointed out that delaying cutting of the umbilical cord is good for the health of the baby. If the cord is cut at least two minutes after the birth of the child, the baby can take in more blood from the placenta, which makes the infant stronger. This delay also helps the baby fight iron deficiency (see ‘Especially good for babies of anaemic mothers’).

According to the World Health Organization guidelines, doctors should wait till the “cord is flat and pulseless.” That happens two to three minutes after birth. Even the Ministry of Health and Family Welfare recommends delayed cord clamping (DCC) in the current national guidelines for the care of newborn and has incorporated the practice in all its training modules in the past two years. Despite clear guidelines, most doctors do not practise DCC.

One of the reasons behind the non-compliance has been the assumption that the baby has to be held in the introitus position (at the level of vagina) for DCC because gravity affects the volume of placental transfusion through the umbilical cord. This is often cited by doctors as a difficult posture to strike, especially with a slippery baby in gloved hands. But a new study by Nestor E Vain and his colleagues from School of Medicine, University of Buenos Aires, Argentina, provides a solution. 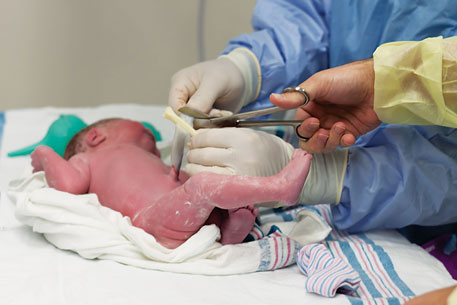 The team has found that the cumbersome introitus position may not be needed and the position of baby has no bearing on the process of placental diffusion. The study was conducted at three university-affiliated hospitals in Argentina. Vaginally- born babies were selected for the study and were randomly divided into two groups—one in which the babies were held in introitus position for two minutes before clamping the cord and the other in which babies were placed on mother’s abdomen for two minutes before the cord was clamped. The newborn babies were weighed immediately after cord clamping to measure weight gain because of placental transfusion in the infants. No significant difference in weight between the two groups was observed. This suggested that equal amounts of blood reached the babies in both groups. “Mean weight change was 56 g for 197 babies in the introitus group compared with 53 g for 194 babies in the abdomen,” write the scientists in their paper published in The Lancet on 17 April, 2014.

Neelam Kler, chairperson, department of neonatology, Institute of Child Health, Sir Gangaram Hospital, says the study has addressed an important and less investigated aspect of cord clamping. “Keeping the baby on mother’s abdomen relieves obstetrician from holding the baby and facilitates maternal bonding. While at the same time the baby may be assessed for the need for resuscitation,” she adds. This should encourage obstetricians to delay cord clamping and keep the baby on mother’s abdomen.

But popularising the simple technique is not going to be easy. “Most of the earlier books recommended clamping of the cord immediately after the birth of the baby. Despite the new recommendations, most obstetricians are resisting the change,” says Sanjay Wazir, chief of neonatal medicine at The Cradle, Apollo Hospitals, Gurgaon.

Cord stem cell banking is also a possible hurdle. “In their earnest zeal to harvest blood, the cords are cut immediately so as to not risk telling the parents that cord blood could not be collected for the stem cells. This fear is unfounded as enough blood remains in the placenta for stem cell collection even after waiting for one-two minutes,” explains Wazir.

“Even in rare cases when the stem cells cannot be collected at the time of birth, it can be collected later from the dental pulp after the temporary teeth fall or in case of females from menstrual blood,” he adds. “Everyone seems to understand the importance of the cord blood when it comes to stem cells, where the blood is collected and banked for years to be used in case of an emergency. I am not sure why we don’t want to give it to our babies straightaway at the time of delivery. It is a well-thought-out marketing ploy,” says Red Miller, co-founder and director of Birthvillage-The Natural Birthing Center in Kerala.

“I have not seen DCC being practised in any maternity room in India. In urban areas, doctors do not go for DCC even after parents ask for it. Doctors give excuses like, ‘your baby is getting cold and it needs to get warmer’, when in reality the issue is lack of patience or interest on the part of the doctors,” she adds.

But there is still hope. Siddarth Ramji of Maulana Azad Medical College, New Delhi, says the practice of DCC is slowly gaining momentum. He adds compliance to DCC is higher in district and sub-district level health institutions as compared to large tertiary care institutions. “We have a policy of DCC in our unit, although the compliance may not be 100 per cent today,” says Wazir. He believes DCC can be popularised by sensitising the people and doctors through media campaigns.