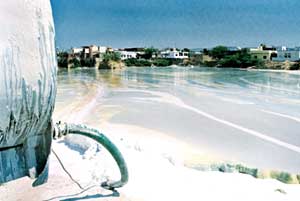 On the outskirts of Chittaurgarh city, in district Chittaurgarh, Rajasthan, lies an abandoned mine. Chhatriwali khaan is a huge crater right beside the highway to Udaipur. Suddenly, disquietingly, the flat terrain gives way to a pool of rippling white fluid laced with pink, blue and brown -- marble slurry. I absorb this sight, also noticing a tanker parked nearby dumping some more slurry. I find the slurry's been transported here from Chanderia, about 15 km away on the other side of the city.

Two roads stretch away on two sides of Chhatriwali khaan. One I am on -- the highway. The other is the one I am about to take. It leads to village Senti.

W hen marble stone, mined in huge blocks, is cut into sellable slabs using diamond gangsaws (mechanical diamond-edged cutters), 15-20 per cent of each block turns to powder. To prevent the blades from being damaged by the heat from the friction between stone and blade, water is continuously sprinkled on them. This water mixes with the marble powder, forming the slurry.

Slurry first began to be dumped in Chhatriwali khaan in 2004. It was the third site around village Senti officials chose for this activity. When dumping first started in 2000, five residents protested, for "this not only means air pollution -- as is the case with places like Udaipur -- but also destruction of invaluable water sources," says Chandra Mohan Saxena, one of the protesters. They were arrested on charges of obstructing official work; their bail amount was set at a stupendous Rs one lakh. "We were not able to stop the illegal act: industrial waste cannot be dumped within three kilometres of any residential area. Thereafter, the mayor promised Chhatriwali khan will not be filled up. But officials duped residents and procured a no-objection certificate," reveals Saxena.

Today, the result of such deliberate dumping is apparent. The area's groundwater is unfit for drinking and cooking; food cooked in such water literally churns the stomach. Senti's Government Higher Secondary School had the Public Health Engineering Department laboratory test its groundwater. The level of total dissolved solids was found to be 5,040 milligrammes per litre (mg/l); the acceptable limit is 500-1,500 mg/l. Total hardness (calcium carbonate) was 2,550 mg/l (acceptable limit: 200-600 mg/l). The school's stopped using the water.

According to Dhanna Singh Rawat of Consumer Unity and Trust Society, a local non-governmental organisation (ngo), the slurry also chokes the aquifers.