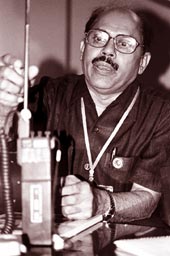 About NIAR
Our institute was established in 1983 to create awareness and conduct training activities on amateur radio (commonly known as ham radio). Communication is vital during a disaster. With early warning, a number of lives can be saved. We train volunteers and mobilise them during disasters; they establish a communication network in the worst affected areas.

About ham technology
It is very close to the radios we use at home. But whereas in those radios we only receive channels, in case of ham, there is also a transmitter. Together transmitter and receiver are known as transceiver. So by ham radio, one can both receive and transmit messages. Radio frequencies are universal throughout the world, and some spectrum of these frequencies has been given to the amateurs. More than three million amateurs across the world use that spectrum and communicate.

Procedure for acquiring ham radios
Possessing transceiver needs certain training and education, which is provided by niar. It further requires a license from the government, which is issued after one clears a test on elemental knowledge of electronics and communication, international morse code. Any person above the age of 12 years is permitted to possess a ham. Government license fee is as low as Rs 25 for five years period. There are 13,000 licensed ham amateur radio operators in India.

Cost of ham radio
Professional set costs about Rs 5,000-6,000. But our student volunteers have assembled ham radios at a cost of Rs 1,000 only. There is no running cost of operating ham radio, except changing batteries. One can talk to any part of the world, practically free of cost.

Example of using ham during a disaster
We used it extensively during the Orissa supercyclone in October 1999. We mobilised our volunteers and 10 of them left for Orissa a day before the cyclone struck. They stationed themselves right from the chief minister's residence to villages. We gave information about the cyclone to people, and got in touch with government departments to share information on availability of food, medicines.

Why hams are not very popular
Chiefly because of lack of awareness about the potential social good this equipment is capable of doing.