A speech for each 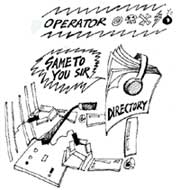 an automated telephone directory inquiries service has been developed by British Technology ( bt ), uk , that can speak with callers and read different accents for better communication. Developers claim the new system could be ready for use as a new national directory inquiries service within three years. The system uses advanced speech-recognition software which bt claims can understand any accent in Britain ( Electronic Engineering , June 1997).

The system has been successfully tested with the 5,000 staff at bt's research laboratories at Ipswich. bt hopes the system will replace company switchboard operators. The system recognises names and letters of the alphabet spoken by the caller and gives the required telephone number.If it offers the wrong name, it apologises and repeats the process, without any human assistance.

The system is based on speech recognition and voice synthesising. Researchers rejected the possibility of using the buttons on touch-tone phones as a way of communicating with the robotic system because it was too cumbersome. Touch-tone works well when one wants to put in numbers. But names are difficult. If one wants the alphabet v , for instance, one would need to press the button 8 thrice to distinguish it from t and u , which also function on the same button.

To enable the voice-recognition software to read the various accents, bt researchers went around Britain collecting samples of regional accents of all ages and both sexes and then broke them down into phonetic chunks. Models were built from the voice samples that broke up speech patterns into elementary pronunciation parts. If the programme wants to recognise a new name, it simply breaks the word down into phonetic chunks and then matches them with the telephone number.

In practice, the system, which uses a female voice, answers the phone with the question, "Which surname, please?" If in doubt, it asks for the name to be spelt and then asks for a first name. If it fails to understand, it says, "Sorry, I missed that." If it is still unsure, it will offer three choices and if all are rejected, it says: "Sorry, I have found the wrong name", and goes back to the start of the process.

The potential for such an automated system is enormous. Large companies could have such a set-up to greet, process and filter all incoming calls, directing them to various departments. Many large companies have switched to automated operator systems where the caller is interrogated by using the keys on the phone to respond to questions, but the concept of a conversation with a computer is more attractive because it offers far greater potential.