A survey on AIDs reporting 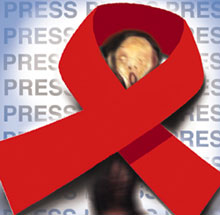 hiv /Aids in Southern Africa is under reported, the voices of the most-affected are least heard and the gender dimensions of the pandemic are not well reflected, according to a study by the Media Monitoring Project and Gender Links (mmpgl), Johannesburg, South Africa. Only 2 per cent of news items in the region focused on hiv/aids. The study led by the Southern African Editors Forum, monitored 37, 000 news items. People living with hiv -constituted only 4 per cent of all journalists' sources while government officials and officials from international organisations made up 42 per cent," said mmpgl's director, W Bird. Men's voices dominated. Forty per cent of the coverage on the pandemic centred on prevention, transmission and sexual power relations, while care and support received just 16 per cent.

"On the positive side, there have been some improvements. These include fewer stereotypes," Bird said.