A taste of nerves

By studying a gene causing a taste anomaly in fruit flies, researchers are trying to interpret the working patterns of the human brain 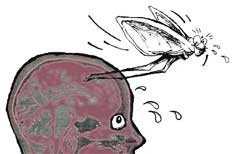 CURRENT research in developmental biology largely consists of isolating a gene and trying to guess from its sequence what its functions might be. V Rodrigues of the Tata Institute of Fundamental Research, Mumbai and collaborators at the National University of Singapore have chosen to study the working of the nervous system that is responsible for the ability of fruit flies (Drosophila melanogaster) to taste. The ultimate aim of these researchers is to study how the brain works -- an undertaking that requires the choice of an appropriately simple model system. Hence, the choice of flies (embo Journal, Vol 14, No 13).

Previous work with the fruit fly had established that the adult fly is able to taste sugars and salts with the help of specialised taste hairs, or bristles, that are found on the proboscis (tongue), legs and wings. A bristle is made up of eight cells. One provides support, three are neurons that respond to touch and the remaining four are taste neurons. Of these four, one each responds to sugars and to water while two are salt-sensitive.

The present work begins with the identification of a mutant gene that responds to sugars but not as well as the wild-type (normal) parent does, and also displays a slightly-enhanced preference for common salt. The gene was named Malvolio (MVL) after the character in Shakespeare's play Twelfth Night, who was said to have a diseased sense of taste. A number of variant forms, or alleles, of the gene were isolated. One of the alleles was a deletion mutant for the gene mvl -- it had the entire coding sequence of the gene plus a stretch of neighbouring deoxyribonucleic acid (DNA) missing. When both copies of the gene had the deletion, flies died during embryogenesis, indicating that some vital function was missing. Electrical recording from taste hairs showed that the defect in most mutants was not in the sensory neuron; therefore, it was believed to lie somewhere 'upstream' in the signal processing pathway of neurons.

The next step was to sequence the portion of dna that coded for mvl. The sequence corresponded to that of a large protein -- 485 amino acids in size, about half of them consisting of hydrophobic amino acids. This suggested that the protein spanned the cell membrane, the double-layered oily (and so, hydrophobic) surface that acts as a barrier between the inside of the cell and the outside environment (both of which are hydrophilic).

The conjecture proved right when it was found that the postulated mvl protein bore a high degree of resemblance to a class of proteins known as nramps (natural resistance-associated macrophage proteins) that are found in the mouse and in humans. In the mouse, one form of nramp is known to confer natural resistance to parasites that can live in the cell's interior.

When the pattern of activity of the mvl gene was examined, it was seen to be expressed in the central nervous system, in sensory nerves and in macrophages, which are scavenger cells belonging to the immune system. Macrophages have the ability to kill infected cells. Nitric oxide is one of the molecules used by macrophages for killing these cells, and the nramp proteins are believed to regulate nitrate and nitrite levels inside cells by affecting transmembrane transport.

It would be striking if the mvl protein functioned like nramp in the fly, which is separated from mammals by more than 500 million years of evolution. But none of this explains the taste defect in mvl mutants. To do so, one needs to invoke a role for mvl in the nervous system. On the basis of the knowledge that nitric oxide is a known modulator of nervous system function, the authors speculate that the mvl protein might help in clearing the nitrites and nitrates that are formed as the result of nitric oxide metabolism.

At present, all we know is that here is a gene with a known dna sequence. It encodes a protein whose activity is inferred on the basis of an analogy with other systems. But the link between the activity of the gene and the Malvolio-like taste disorder exhibited by mutants remains a mystery for the present.