A tough year for the scribe 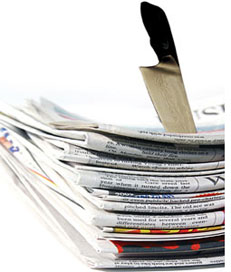 The South Asia Media Commission has declared 2007 a very difficult year for South Asian journalists. The year saw 25 journalists and media workers getting killed in the line of duty. Besides, the media had to face "unprecedented restrictions and forced closures" in Pakistan, Sri Lanka and Afghanistan.

The report, released on December 31 found that barring Bhutan, no other saarc country had been free of attacks on the press. Pakistan topped the list with seven journalists killed.

Sri Lanka came a close second with six deaths, Afghanistan third with a death toll of five journalists, and Nepal fourth with a tally of three. Besides, a media worker was killed in Afghanistan and three lost their lives in India.

In India, the Commission noticed disturbing trends: "Arrogance by the authorities, especially in the states; misplaced enthusiasm to 'reform' the media, and intolerance of militant groups, evident in disproportionate, violent reaction to publication of the accounts of their activities not to their liking."