A UK review on low-carbon cars 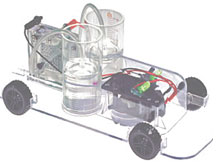 The uk's review of technologies and fuels for reducing carbon emissions by vehicles is complete. Chairperson of the review Julia King, while discussing the study in Mumbai recently, claimed that complete de-carbonization of road transport through hydrogen- and electric-powered vehicles was a realistic goal for the uk for 2050. By 2030, she said, per kilometre co2 emissions could be reduced by 50 per cent. This is, however, equivalent to a 30 per cent reduction in absolute emission levels because during the same period part of the gains are likely to be offset by increased driving.

In the uk in 2005, road transport contributed 22 per cent of the total co 2 emissions, of which 13 per cent came from passenger cars alone.

The King Review, set up in the wake of the Stern Review on economics of climate change, has recommended a combination of strategies that include cleaner fuels, more efficient vehicles and improvement in driving pattern. King, also the vice-chancellor of Aston University, Birmingham, is likely to present her recommendations to the uk government by the end of February.

The focus is on aggressive, high-end technologies that include electric vehicles with novel batteries charged by zero-carbon electricity or by hydrogen produced with zero-carbon electricity. This approach is combined with emphasis on clean fuel, suggesting that all fuels need to be considered based on their life-cycle emissions of co2 and not just tailpipe emissions. Also, the extra electricity demand from vehicles must be met through low - co2 sources. The review points out that the technology for conventional vehicles that can reduce co2 emissions per car by 30 per cent is "close to market".

King, however, does not talk of controlling personal cars for tackling pollution and global warming. "Personal mobility is a strong driver of economic growth and well-being. We cannot stop people from aspiring for a car," she said. "But we need technology that helps curb pollution." Technologies that can nearly eliminate greenhouse gases as well other pollutants are, however, likely to achieve commercial scale only in 2050.

The review is not explicit on local air quality targets that must also guide petrol and diesel technologies during the intermediate stages. King Review has also turned a blind eye towards congestion. "King has confined herself to the emissions issue and not examined the congestion problem. She speaks of technological developments which have taken place but are not yet widely available in cars," says Stuart Cole, director, Wales Transport Research Centre. "The provision of choice is only possible if it affects no one else. In London, the wealthiest travel on the Tube, not out of choice but because the choice had to be denied to them in the public interest," he adds.

The European emissions standards are not stringent enough to enable electric hybrids and hydrogen cars to be commercially viable. At the same time, the automobile industry in the uk has met a fleetwide co2 level of only 160 g/km as opposed to the voluntary standards of 140 g/km co2 emissions for cars by 2008. The King Review will have to recommend how quickly the emissions standards can be upgraded to reflect the requirements of the near-zero- and zero-emissions technologies it is touting. This is important to make sure that local air pollution does not go unchecked while lowering greenhouse gas emissions.

The uk government's data shows that between 1996 and 2005 the amount of fuel used for each 100 km new cars covered declined by 6 per cent as a result of improved efficiency, but during the same period co2 emissions from private cars rose by 4 per cent because of the increased distance travelled by the cars. And because of no control on private cars pm10 levels initially declined by 29 per cent from 1996 to 2000. But the subsequent decline was much smaller at 3 per cent, chiefly due to introduction of more diesel cars.

King dismisses such fears. "There is always a trade-off involved and a solution can lead to small problem elsewhere. But we, in any case, are living with pollutants such as pm10. Global warming is a much bigger challenge," she told Down To Earth. Criticism has ensued. King is considering only part of the issue, and recommendations based on the study of half the picture can be dangerous, says Cole.

The ambitious technology roadmap the review has presented will have to be implemented on an accelerated scale to meet the dual objectives of co2 reduction and alleviation of local air pollution. The King Review should push for a strong regulatory and fiscal regime to realize the zero emissions goals it has set for the uk. Without them the proposed technology roadmap may be reduced to a science fiction.