A view into the past

A new galaxy sheds light on the origins of the universe 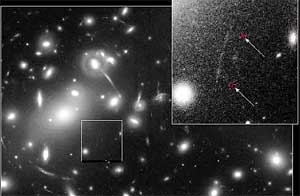 a very small, faint galaxy -- possibly one of the long sought 'building blocks' of present-day galaxies -- has been discovered by a collaboration of two telescopes and their crews of astronomers.

The us National Aeronautical Space Administration's Hubble Space Telescope and the 10-metre Keck Telescopes spotted the galaxy at a tremendous distance of 13.4 billion light-years. This places it close to the origins of the universe, which is estimated to have an age of around 14 billion years. This has profound implications for understanding how and when the stars and galaxies first formed in the universe.

Since light coming from the galaxy is nearly as old as the Universe itself, the astronomers are looking back in time at a very young galaxy where stars are still being formed.

The first galaxies in the universe hold invaluable clues that shed light on the period known as the cosmic 'Dark Ages', a period that lasted possibly up to one billion years after the Big Bang and ended when the first generation of stars appeared. "We believe this galaxy is one of the galaxy building blocks that join together and make up larger galaxies later in the history of the Universe," says Konrad Kuijken of The Netherlands-based Kapteyn Institute.

The international team of researchers determined the amount of matter in the object to be astoundingly low for a galaxy -- only a few million times the mass of the Sun, or about one hundred thousand times less than the amount of matter in the Milky Way galaxy. The object is only around 500 light years across, as compared to the 100,000 light-year diameter of the Milky Way.

The discovery was made possible by examining small areas of the sky viewed through massive intervening clusters of galaxies. These galaxies act as a powerful gravitational lens, magnifying distant objects and allowing scientists to probe how galaxies assemble at very early times. Normally, such a small and distant galaxy would be invisible to any telescope. What astronomers required was a magnifying cluster of galaxies lying in between, in this case -- Abell 2218, a compact cluster of thousands of galaxies two billion light-years away, one of the largest concentrations of mass ever seen. It's gravitational force has helped see the young galaxy.