A week dedicated to space discoveries and feats 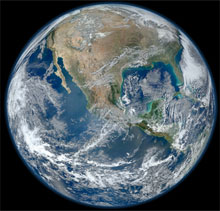 Mangalyaan has been safely placed in the orbit of Mars and is busy looking for signs of methane on the Red Plant and carrying other operations it has been programmed to. While India’s spacecraft continues to work like a dedicated employee, here is another discovery from the realms of space that can raise hopes of presence of life on other planets in space.

“Why this is important? If water in the early Solar System was primarily inherited as ice from interstellar space, then it is likely that similar ices, along with the prebiotic organic matter that they contain, are abundant in most or all protoplanetary disks around forming stars,” Alexander explains. “But if the early Solar System’s water was largely the result of local chemical processing during the Sun’s birth, then it is possible that the abundance of water varies considerably in forming planetary systems, which would obviously have implications for the potential for the emergence of life elsewhere,” he adds.

Smallest known exoplanet containing water discovered
In another development in the week, HAT P-11B, the smallest known exoplanet (about the size of Neptune) to contain water in its atmosphere yet, has been discovered. Reports suggest that the planet isn’t capable of sustaining life as we know it. However, the planet is mainly gas, with temperatures reaching 605 degrees Celsius.

NASA’s Curiosity makes everyone curious
Meanwhile, NASA’s Mars rover Curiosity has reportedly spotted a weird ball on the surface of the Red Planet on Wednesday. Scientists are still wondering if it is a ball or a meteorite and where did it come from.

The rover has also drilled its first full hole in Martian rock since May. "Curiosity has previously drilled into three rocks to collect powdered tailings for analysis in its sophisticated onboard laboratories," says a BBC report.

Newfound molecule in space offers clues to life's origins
The discovery of a strangely branched organic molecule in the depths of interstellar space has capped a decades-long search for the carbon-bearing stuff, says report published in Space.com. The molecule in question — iso-propyl cyanide (i-C3H7CN) — was spotted in a huge star-making cloud of gas and dust near the center of the Milky Way.