A wolf too many 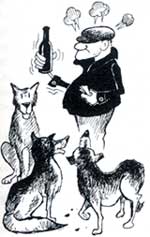 The wolf is quite literally at the Russian door. The wolf population in the country has risen from 22,500 in 1990 to 30,000 last winter. Animal-watchers see a close link between the rise in lupine numbers and the economic crisis in the country. Inflationary trends have made a mockery of the money that was given to bounty-hunters -- the main controllers of the wolf population. The 100 roubles that was given years ago for killing a male wolf, for instance, would keep hunters in high spirits as it would fetch them 30 bottles of vodka. Today it leaves them stone cold sober -- and asking for more.